You are here: Home / Senza categoria / FBI foils plots to sell nuclear material to Islamic State for a dirty bomb 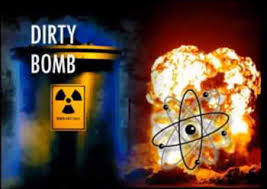 Gangs of smugglers have tried to sell highly-radioactive material to Islamic State militants, an investigation has found.

Authorities working with the FBI have foiled four plots in the last five years involving groups with Russian connections seeking to do deals with Middle Eastern extremists.

The most recent case, in February, involved a smuggler looking for an Islamic State buyer for enough deadly caesium to contaminate hundreds of homes and offices.

In 2011, a group led by a shadowy Russian known as “The Colonel” – believed to be an officer with Russia’s FSB intelligence agency – tried arrange the sale of bomb-grade uranium and blueprints for a dirty bomb to a man from Sudan. The plot was disrupted in a raid on the middleman’s home but The Colonel escaped and authorities do not know if he has more nuclear material.

The middleman told an informant posing as a buyer that it was essential the smuggled uranium go to Middle Eastern extremists, saying: “I really want an Islamic buyer because they will bomb the Americans.”

In another case, gangsters said they could provide 10kg of uranium – around a fifth of what was used over Hiroshima – in 1kg installments costing £24m each.

In most cases mid-level players were arrested but the ringleaders got away, possibly with the bulk of the radioactive material. Many lower level gang members are getting off with light prison sentences, including The Colonel’s partner, who said he wanted to “annihilate America”.

Moldovan police and judicial authorities shared investigative case files with the Associated Press to demonstrate how dangerous the nuclear black market has become.

They say tensions between Russia and the West mean it has become much harder to know whether smugglers are finding ways to move parts of Russia’s vast store of radioactive materials – an unknown quantity of which has ended up on the black market.

Constantin Malic, a Moldovan police officer who investigated all four cases, said: “We can expect more of these cases. As long as the smugglers think they can make big money without getting caught, they will keep doing it.”

The investigation combined traditional undercover tactics and high-tech devices including radiation detectors and clothes with recording equipment woven into the fabric.

Informants and an undercover police officer posing as a gangster – using a Mercedes provided by the FBI – made connections with the gangs through secret meetings in high-end nightclubs.

Matthew Bunn, a Harvard professor who led a secret study for the Clinton administration on the security of Russia’s nuclear arsenal, told AP: “In the age of the Islamic State, it’s especially terrifying to have real smugglers of nuclear bomb material apparently making connections with real buyers.”