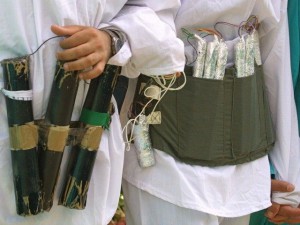 A suicide vest detonated prematurely during a meeting held by the Islamic State (ISIS/ISIL) in Iraq, killing 16 jihadists, including senior figures, and wounding 16 others, according to Iraqi media.

The terrorists were reportedly meeting in the village of al Mahaws, about 34 miles southwest of the northern Iraqi city of Kirkuk, to plan an attack against U.S.-backed Iraqi security forces.

However, the assault was thwarted by the faulty explosive device before it began.

“The explosion resulted in the killing of 16 members of the Islamic State (ISIS) group, including senior leaders, as well as wounding 16 others,” reported Al Masdar News, citing the Al Sumaria Iraqi media outlet.

A number of the ISIS members were wearing explosive belts during the meeting, and the explosion took place due to a defect in one of them. The meeting was held to prepare for an attack on the positions of the security forces in Hamrin Mountains, al-Zawiya area and Ajil area in Salahuddin Province.

Daily Mail notes that the incident is not unprecedented:

It is not the first time this year that they have managed to accidentally take out their own troops, with around a dozen extremists being killed in eastern Afghanistan in March when they accidentally set off a bomb that they were trying to plant.

At least 21 other jihadists were also injured during the botched operation in Afghanistan.

In August, video footage emerged purporting to show Kurdish security troops removing an explosive belt from an alleged ISIS suicide bomber, believed to be 12 or 13, moments before it was to be detonated in Kirkuk.

Earlier this year, the West Point-based Combating Terrorism Center reported that ISIS is “mobilizing children and youth at an increasing and unprecedented rate [and] that the number of child and youth militants far exceeds current estimates.”

Referring to the jihadist group’s use of child suicide bombers, the report determined:

It seems plausible that, as military pressure against the Islamic State has increased in recent months, such operations […] are becoming more tactically attractive.

Of 89 cases of young people who were featured in official ISIS reports as “martyrs” between January 2015 and January 2016, the report found that “39 percent died upon detonating a vehicle-borne explosive device, 33 percent were killed as foot soldiers in unspecified battlefield operations, six percent died while working as propagandists, and four percent committed suicide in mass casualty attacks against the civilian populace,” points out Breitbart Jerusalem.