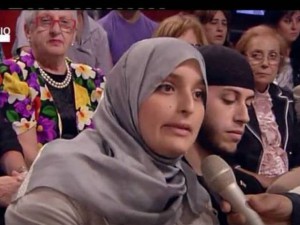 It is news that has transfixed Italy. In a few short years an educated and articulate young woman converted to Islam, became radicalised and went to join Isis in Syria before persuading her family to join her.

After marrying a local pizza-maker of Moroccan origin, the Naples-born 27-year-old, dubbed “Lady Jihad” by the Italian press, rejected her husband’s moderate brand of Islam and left him for an Albanian, Aldo Kobuzi, who “interpreted the faith in the correct way”, as she told a friend, before travelling to Syria with Mr Kobuzi and his mother in September last year.

But it is the news that her formerly staunchly Catholic mother, father and sister subsequently converted and were preparing to join her in Syria, before police arrested them on Wednesday this week, that has stunned Italy. In Skype conversations with her family in March, Ms Sergio was heard imploring them to join her and Isis: “It is the perfect state, like paradise”, she said, adding there was “food in abundance”, “healthcare” and “rigid rules even in dress codes”.

Her sister Marianna, 31, appeared to be the keenest to head to the Middle East. Her mother, Assunta Buonfiglio, 60, was eventually persuaded when it was promised that Isis would supply her with a washing machine, La Repubblica reported. Her father, Sergio Sergio, 61, had recently quit his job as the family made plans to flee Italy.

Of Ms Sergio’s family, it appears that only her grandmother had sufficient faculties to resist the offer of life with medieval killers in wartorn Syria. She was described by her jihadist granddaughter as “a non-believer who deserves to be left behind”.

One neighbour nearby the family home in Inzago, north of Milan, told La Stampa: “They were a respectable family, we’ve known them for ages. They were brainwashed.” The family moved to Inzago from Naples 20 years ago, and were said to have sought financial help from the local parish and Catholic charity Caritas.

Back on the 2009 talk show Women and Islam, which TV news shows are now repeating constantly, Ms Sergio, a biological science graduate, told conservative parliamentarians of the need to tolerate and respect different cultures.

“These are not just idle words, these are obligations… You should see what the Mujahideen do for love of Allah… 15- and 16-year-olds killing 50 non-believers… That’s what we have to do to expand the Islamic State.”

Five Albanians, including Mr Kobuzi’s aunt, Arta Kacabuni, 41, in Grosseto, Tuscany, and his uncle, Baki Coku, 37, who was stopped while travelling in Albania, plus a Canadian national, were also arrested.

In a separate operation on Wednesday, Carabinieri police arrested two North Africans as part of an investigation by Rome prosecutors into an alleged al-Qaeda-inspired Islamist cell planning attacks in Italy.

The suspects arrested were named as Abderrahim El Khalfi Abderrahim, 37, from Morocco, and Tunisian Ahmed Masseoudi, 29.

A third person, a Moroccan, who was already in jail in Morocco, is also under investigation. He was named as Mohammed Majene, 27, from Oujida. Investigators said the suspects aimed to “plan and execute terrorist acts in Italy and North Africa”.

They are suspected of using the internet site i7ur to advocate jihad and recruit supporters, police said.