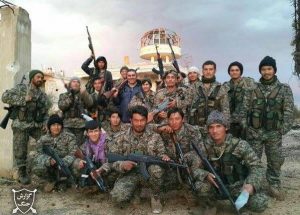 Mohammad Javad is a commander in the Fatemiyoun Brigade, the unit of Afghan soliders fighting for Iran in Syria, like reported by iranwire.com.

His experience and military background in Afghanistan, in addition to his contacts in and knowledge of Iran, have put him in a solid position. When he joined Fatemiyoun, he roamed Syria as though it was his father’s village. He carried out military operations in areas of Maliha, Germna, Deh-e-Salman, Qasimia, Forsia, and Otaiba in Damascus. He planned while in Raziqia, at the Turkish border near the Mediterranean Sea, and took on ISIS in Homs. He cleared areas in Shota and Nahrolbar of ISIS. He still remembers the code names for operations in various cities, including Titamor, 900 Hill, Cloud 1, Cloud 2 and Dakal.

Human Rights Watch has reported that the Islamic Republic of Iran deploys Afghan children to fight in Syria. According to the report, children under the age of 14 were among those recruited to join the war. The organization verified eight graveyards in Iran where the children killed in Syria are buried. After these children, between the ages of 14 and 17, were killed, they were then transported to Iran.

The commander confirmed that there were children among his men: “The combatants are in different age groups, from 15 to 70. Our last martyr was 15. Reza. ISIS arrested and beheaded him. I also saw a man around 70 [years old]. Once the Revolutionary Guards decided to expel the elderly fighters, but the people didn’t accept it. We had said each of them represent a tribe. We asked them to come and see it with their own eyes. But the majority of the combatants were young. They used to come from Afghanistan, from cities within Iran and, in short, from everywhere.”

One of Javad’s most interesting operations took place at the Forsia Military Base in Damascus. A Fatemiyoun commander was surrounded by ISIS militants, and the encirclement was getting tighter and tighter — ISIS was about to capture the commander alive and behead him. It was evening and raining. The commander kept calling out for help for the rescue of his men and himself. The roads were generally blocked and ISIS snipers made it difficult for any reinforcements to approach the encircled base.

Javad recalled the following memory, with a bitter smile on his lips: “With our coalition we jumped in to help. First Syrian army people escaped, then Hezbollah fled, followed by Haidaryoun. The Iranian military advisers left too. There were only 30 of us to go to the help of the commander. There were unknown numbers of ISIS fighters. It was a tough operation. It was raining and cold. We resisted. We deployed 15 people in the trench and moved in with a tank and air defence to rescue the commander. Unfortunately, the people in the air defence machine were taken captive by the enemy. We lost five people, but rescued the commander and it was a successful operation. The Takfiris later claimed that the Syrian Army had imported troops from China to protect it. It was a tough but interesting operation for us.”

The Hazara citizens of Afghanistan have features similar to the Chinese. In light of this, Javad shared a story from Aleppo: “[When] we were in Aleppo, there was an incident that made us cry and laugh at the same time. It was early in the morning when it was reported that Takfiris had attacked, [and] some left the trench. We got worried and [increased] reinforcements in the bunker, and waited for their caravan to come close. We started fighting and killed four of them. They pulled back and launched another attack with two missiles. We prepared the guided Kornet missile on the launcher and viewed them [the enemy] through a long-sighted camera. We noticed that they were carrying a red flag instead of ISIS’ black flag. They could not be ISIS! We contacted the headquarters and they confirmed that these were Zainabyoun, fellow Pakistani fighters. The skirmishes ended. We cried over killing four of their men, and laughed imagining [that], were we to be defeated by these fighters, there would be no place for Fatemiyoun in Syria.”

Fatemiyoun has taken pride in gaining step-by-step experience with the Revolutionary Guards over the last decade in Syria. Commander Javad explained that the area of training has expanded from shooting and bombing during this period of time: “The method of fighting was to divide the Fatemiyoun combatants into smaller units consisting of several groups. We had learnt to fight properly, but there were some inexperienced forces too. For the embattled forces, planning was crucial. For instance, we had to make sure that our equipment was complete before the start of the fight. We had to gather intelligence and, in order to do that, we needed to assess the situation in the region at night. We needed to know about the equipment and number of the enemy, and then we could launch the operation. If we were defeated in some places, we had to have analysis and assessment.”

Javid added: “We operated in divisions and groups of 450 people under one command. Fatemiyoun had become an army of 12,000 people. It had several separate divisions, such as artillery, squadron, intelligence and operations, protection, support, logistics, and equipment. We also had a separate fighting force. Fighters were placed in different divisions.”

But the Revolutionary Guards sometimes failed to provide all necessary resources for the Fatimyoun, For example, troops under Javad’s command once faced severe water shortages.

“The Iranians told us to go to the new base … [where] everything was fixed for us. There were 560 of us. When we went to the base, there was no drinking water and no water for ablutions. We went to the nearby Syrian base. We did not know Arabic, and they did not speak Persian. All we had learnt was the phrase, half in Persian half in Arabic, ‘This is Fatemiyoun’s base. There is a large group of people without water.’ They replied in Arabic, and we understood nothing. We were under pressure from the forces and needed water; we had real problems. The boys had no permission to leave the base and visit the villages because we had no information about the area. We were scared of ISIS kidnappings, beheadings, and their publishing on the internet. … [In addition] our men were young and the Syrian women were … half-naked [in the] clothes [they wore]. They [the women] used to shake hands with men as well. We didn’t go there [to Syria] for these things. In short, we found water, [but] with big headaches.”