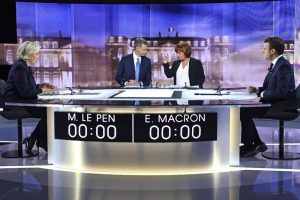 Fake news has taken centre stage in the French election after Marine Le Pen, the far-right contender, and internet activists hinted that her opponent, Emmanuel Macron, had a secret fund in the Bahamas, like reported by euobserver.com.

The Paris prosecutor opened a preliminary inquiry into the affair on Thursday (4 May), after Macron filed a complaint against an unnamed person for use of fake information to influence a vote.

“I have no account in the Bahamas,” the centrist candidate also said on France Inter radio on Thursday morning.

“I never had any account in any tax haven. It is not my temperament, in my deep character.”

Le Pen gave wings to the rumour on Wednesday evening, during an acrimonious TV debate ahead of Sunday’s run-off.

Macron said Le Pen’s National Front party was “the party of financial scandals”, referring to an enquiry into its alleged misuse of EU funds.

She replied: “I hope that we won’t learn that you have an offshore account in the Bahamas, or anything, I don’t know.”

“I hope we won’t learn anything in the coming days or weeks. Nobody understood what you said about your properties”.

Macron immediately accused her of “defamation”, but articles and posts were already spreading the allegation online.

According to Macron’s team, the rumour started on 4chan.org, an internet message board, two hours before the TV debate.

One 4chan.org message linked to purported “documents proving Macron’s secret tax evasion” and mentioned “a shell company in Nevis” and “a banking relationship with a bank involved in tax evasion in the Cayman Islands”.

The message said “Macron underreported his income and assets to the government”, an allegation that was later echoed by Le Pen on TV.

The message board is popular with US far-right activists and already launched an attack on Macron last month.

Wednesday’s post was quickly shared on Twitter, first by 4chan.org and other US right-wing activists, then by accounts linked to Russian state media RT and Sputnik, Macron’s team said.

Nicolas Vanderbiest, a Belgian researcher, reconstructed what happened next.

He said that an article published by a far-right US website, Disobedient Media, under the title “Documents indicate that Emmanuel Macron may be engaging in tax evasion” was among the most widely shared during the TV debate in Paris.

Vanderbiest said “all of Russian propaganda’s most influential [online] accounts”, shared the story.

He said “international Trump-propaganda” and other “pro-Russian accounts” shared it too.

He also said that newly created accounts, which did not yet have any followers, as well as US accounts tweeting in French, got in on the act.

The Bahamas story comes a few days after the Atlantic Council, a US think tank, and Buzzfeed, a US news site, reported that far-right US activists tried to launch viral anti-Macron content on social networks.

Russian and Russia-linked media, which said he was secretly gay, that he was funded by Saudi Arabia, and that he washed his hands after greeting workers, have also tried to do harm.

The stories and rumours, as with the Bahamas allegations, were spread further by bots, automatic accounts on social networks, that were in many cases linked to pro-Russian or pro-Trump websites.

“This is typical of what we call fake news,” Macron told France Inter.

He said he did not believe it was “a coincidence” that Le Pen brought up the issue in the TV debate at the same time as it was being spread online.

He said Le Pen had “organised [her] troops on the internet” and planned the attack “with her allies”.

These allies, he said “have bombarded me with fake announcements and lies. They are these websites, some of which are linked to Russian interests”.

In an interview on BFMTV also on Thursday morning, Le Pen said that she was “not at all” accusing Macron of having accounts in the Bahamas, because she had “no proof”.

She said she raised the issue on TV because she did “not want that we discover it too late”.

“Are we no longer allowed to ask him the question?” she added.

Speaking also on Thursday, Louis Aliot, a politician in Le Pen’s National Front party and also her partner said on Europe1 radio that “something [on Macron] will certainly come out today”.

As of Thursday afternoon, the Russian state news website Sputnik did not have any articles on the Bahamas story, either in English or French.

Its French version only ran a story saying that after the debate, “Le Pen is more popular on the net, Macron more convincing”. RT, another Russian state media, reported that Macron had filed a complaint.

Both also had articles about former US president Barack Obama supporting Macron in a newly released video.