You are here: Home / FakeNews / Fake news: how Russian propaganda becomes even nastier in Baltic news 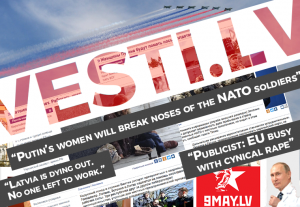 Fake names and miserable wages: what it’s like to work in the Kremlin-friendly local Russian language newspaper, like reported by rebaltica.lv.

Published in Latvia, Segodnya newspaper claims to be the only Russian-language daily in the European Union. I met one of the newspaper’s journalists Yelena Slyusareva three years ago on a trip to Sweden, sponsored by the Swedish embassy. As part of the trip the group of journalists went to interview the Swedish royal couple. Yelena’s English was poor, so interpreted for her from English to Russian.  We got on alright.

While we were in Sweden, a controversial referendum on joining Russia was held in Crimea. Much like many issues involving Russia and Russians in the Baltic state of Latvia, the news coverage of this event in the Latvian-language press was vastly different from their local Russian-language counterparts. Latvians worried about the Russian aggression and did not hide their concerns that the Baltics may be the next in line Putin’s Russia may wish to “liberate”. For Segodnya, the annexation of Crimea was a happy reunification.

Yelena defended her newspaper: her colleagues really believed in what they wrote, she’d say. There was a plurality of opinions because her boss allowed her to pen an op-ed condemning Russia’s aggression in Ukraine. Yelena also criticized Latvia’s Russian population, who refused thinking with “their own heads,” surrendered “their power to the Russian television” and “closed their eyes as though they didn’t understand what was happening.”

Her op-ed was published, but half year later, in October 2014. Yelena says the article caused an uproar among her colleagues and readers: “Why did you have to offer your opinion when no one asked for it?”

About the same time as the article went to press, Yelena was on a Russian embassy sponsored trip to Crimea. She insists the embassy did not issue any guidelines on the coverage.

From Crimea, Yelena brought back a series of articles. The first article stated that the trip had been paid for by the Russian embassy. The following articles didn’t.

Yelena said that the articles were not censored and she tried to show all sides of the complex story. One of them featured an interview with the editor of a newspaper in Yalta, who thanked Putin for the support. Another focused on the Crimean Tatars, who demanded the return of their homeland. However, she didn’t say anything when next to the article about the Tatars, an editor published an op-ed piece mocking their desire to become part of Europe, inviting them to visit Latvia to see how bad Europe really was.

A few months later, Yelena was laid off. The official reason was the staff downsizing, but “unofficially I have already been told: you need to understand that you cannot work in the Russian press with your viewpoints,” Yelena said. She asked to work at the newspaper for another month because she was preparing a residency permit for her mother and brother, who were fleeing to Riga from the war-torn eastern Ukraine.

“I was the only bread winner,” she says. She tried to argue with her editor, saying that the newspaper has been defending the residents of the eastern Ukraine, which was why it needed to help her, too. The editor responded, “It’s only business.” He allowed her to work until the end of the month.

Sergey Storchevoy, who worked as a publishing company manager at that time, questioned her side of the story to Re:Baltica. He said Yelena’s dismissal had nothing to do with her political views, but with the staff cuts and an opportunity to hire better journalists to replace her.

I contacted Yelena again as part of the investigation into owners of internet sites that cover events in the Baltics in a same vein as the Kremlin-controlled news media.

“Putin’s women will break noses of the NATO soldiers,” screamed a headline on website vesti.lv, sister-publication to the newspaper Segondya, on Feb 21, 2017.

Under the click-bait headline was a recycled article by the Russian state-run news agency RIA Novosti, which quoted The Times (UK) report on possible use of local women to stage provocations against the NATO soldiers. The original headline of article in RIA Novosti is softer: “People in Estonia fear that Moscow will provoke NATO troops for a brawl.” The article was also reprinted by the Sputnik web site, which together with RIA Novosti makes up part of the state-run media conglomerate Rossiya Segondya.

It is a standard practice for vesti.lv to republish articles produced in Russia, slapping on more provocative headlines.

In another example rubaltic.ru, a Kaliningrad-based news site, writes that The Baltic States will close the door to guest workers. Vesti.lv re-publishes the same text under the headline Latvia is dying out. There’s no one left to work.

The article about Putin’s women was signed by Anatoly Tarasov. It was a busy day for him. It started at 6:50 a.m. with the news item about the EU preparing “a new russophobic plan”, moving on to story about a new music video by an American singer Lana del Rey. Then he filed a piece informing the audience how Latvia’s non-citizens — mostly Russian-speakers — can obtain citizenship of a Moscow-backed, internationally unrecognized Donetsk People’s Republic in eastern Ukraine. It was followed by an article about refugees fleeing Lithuania. The day concluded with a review of a Hollywood movie at 4:29 p.m. On that day, Tarasov wrote more than 20 articles.

You won’t find this prolific journalist on social networks or in local journalist organizations. Anatoly is a work of fiction. Journalists at vesti.lv can select one of several aliases, so to create an illusion of a team work, even though it is only one person who copies and pastes news articles from various news sources on the internet, according to several former vesti.lv journalists who requested anonymity to Re:Baltica.

Andrey Shvedov, the newspaper’s editor-in-chief, couldn’t find the time to give us an interview. That’s why I started talking to his journalists.

At least two of them have moved permanently to Russia.

One is Vladimir Veretennikov, who often writes for the Russian news site lenta.ru.

Lenta.ru used to be a very popular and influential Russian news website. After the editor-in-chief was fired over the coverage of the conflict in Ukraine back in 2014, part of their old team quit in protest and moved from Moscow to Riga to build up their new news project called meduza.io.

Attempts to contact Veretennikov were unsuccessful. However, a contact with another recent Moscow transplant of Segodnya, Dmitry Mart, turned into a lengthy email exchange. He said he was tired of “reading every day about the integration and the state language inspection. When the fascist Germany existed, many moved away to live somewhere else. In Moscow, I live in harmony and free.” The salary of the Russian-language journalist in Latvia, which is almost never publicly discussed in Latvia, is smaller than the salaries of their Latvian-speaking colleagues. The journalists interviewed by Re:Baltica say they would get between 300 to 500 euros a month after taxes. Mart says life in Moscow doesn’t have to be that expensive. An apartment and potatoes are even cheaper than in Riga, he wrote.

Another Segodnya journalist, Andrey Tatarchuk, agreed to meet in person. The vigorous, smiling man of about 50 years old, Tatarchuk said that Segodnya publishes negative articles about Latvia because its audience demands it. A similar argument was put forward by other former journalists, however none of them was able to say who its target audience was. The common line was that it’s pensioners or disillusioned men of the pre-pension age, whose media diet includes Russia’s TV channels which have been available through cable TV providers in Baltics.

“At some point, the local Russian-language media got this impression that the Russian readers have this point of view,” said Slyusareva. “Readers, whenever I meet them, no longer necessary hold to these views. Yet the newspaper continues to peddle them and, as a result, continues to lose readership.”