You are here: Home / Africa / Failed suicide attack on Swedish troops in Mali 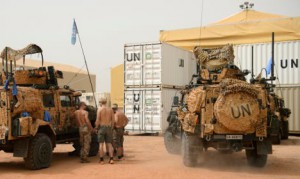 Swedish soldiers in Timbuktu were caught up in a suicide attack late last night.

“On Monday night a Swedish patrol on a mission in Timbuktu city was exposed to a suicide bomber. No Swedish soldiers were injured in the incident,” read a statement by the Armed Forces.

It added that the troops were being looked after by the Swedish unit in Mali.

“The most important thing for us just now is that we don’t have any injured Swedish personnel,” spokesperson Tony Remes told the TT news agency. “Some form of crisis team is looking after them.”

Information about the attack was scarce on Tuesday morning, but the Armed Forces said they understood there were no other nationalities involved. No reports have emerged about any other injuries.

The Swedish troops in Mali are part of an international UN-led peacekeeping mission.

Around 250 Swedish soldiers are based at Camp Nobel outside of Timbuktu.

A week ago a UN soldier from Tchad was killed and eight others wounded in an attack on a UN camp in north-eastern Mali.