You are here: Home / Mediterranean / Extremists extradited to Morocco from France adhere to ISIS

Investigations led by the Central Bureau for Judiciary Investigations (BCIJ) with ISIS extremist supporters extradited to Morocco from France on August 28, 2016, revealed their complete adherence to ISIS’s strategy and terrorist ideology, the Interior Ministry said Thursday 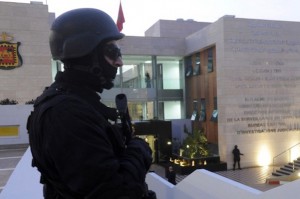 One of those arrested was recruited by an ISIS’s leader on the Syrian-Iraqi scene, who called him to suspend his plan to join this hotbed of tension, in order to coordinate large-scale terrorist operations in France on behalf of the “Islamic state,” the ministry added in a statement.

As part of this terror plot, this individual scouted out several public and sensitive sites in France, his country of residence, particularly those frequented by a lot of people during weekends, with a view to perpetrating attacks using firearms or vehicles with the intention of ramming into crowds or triggering fires to kill the biggest number of people possible.

Moreover, the individual has joined ISIS’s broad campaign of incitement within ISIS supporters to carry out large-scale terrorist attacks in Morocco by targeting vital areas and elements of the various security services, in response to the fight led by these services against ISIS terror cells and ISIS-supporters at the national and the international levels.

The two men will be brought to justice pending the completion of the probe led under the supervision of the competent public prosecutor’s office.