You are here: Home / Mediterranean / Expulsion from Derna may show limits for ISIS in Libya 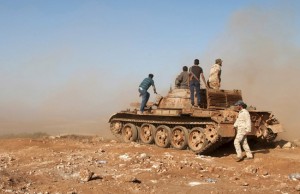 ISIS militants have exploited widespread chaos to gain a foothold in Libya, but their ejection from an eastern city suggests they may not achieve a Iraq-style takeover due to strong local rivals and the absence of sectarian divisions.

It was the first setback in Libya for the ultraviolent militant movement that has sent in combatants and preachers from Tunisia, Yemen and other Arab states to try repeat its success in Iraq and Syria, where it has captured vast territories and proclaimed a “caliphate” based on medieval religious precepts.

ISIS has benefited from Libya’s anarchy. Two rival governments are fighting each other and unable to gain the upper hand while former rebel groups that helped topple Moammar Gadhafi in 2011 compete for power, creating a security vacuum.

But ISIS was driven out of Derna after seven people were killed at a protest against the influx of foreign militants and the killing of a commander of the local Abu Salim Martyrs Brigade, allied with a former anti-Gadhafi militia in the town.

A number of angry residents joined the Abu Salim Martyrs to help them expel ISIS from Derna, an Islamist hotspot even during Gaddafi’s 42-year rule in which he suppressed political Islam.

Sunni ISIS has drawn considerable grassroots support in Iraq and Syria by milking long-standing Sunni-Shiite sectarian enmities. But this does not work in Libya, an exclusively Sunni country where local Sunni armed factions and tribes regard ISIS as an infiltrator and competitor.

“People had had enough of ISIS,” a Derna resident said. “The Abu Salim Brigade has enjoyed some support going back to the [anti-Gadhafi] revolution.”

Mattia Toaldo, policy fellow at the European Council on Foreign Relations, said ISIS would now probably focus on its other Libya power base – Sirte, Gadhafi’s hometown on the country’s central coast where ISIS has won unusual support from Gadhafi loyalists opposed to Libya’s jostling new rulers.

ISIS insurgents have attacked oil fields south of the central city and kidnapped some nine foreign workers. They also executed 21 Egyptian Christians near Sirte and stormed a luxury hotel in the capital Tripoli, killing five foreigners.

Toaldo said he expected the militants would try to set up checkpoints at a strategic central junction where the east-west coastal highway links with a passage to Sabha, a city in Libya’s far southern desert. “They would be able to ask for a lot of protection money [there],” he said.

Unlike in Iraq and Syria, ISIS has been unable to earn millions by selling oil on the black market because it is dominated by Libyans. ISIS therefore relies on ransoms paid for abducted prisoners and on state salaries paid to local members in Libya, where most adults remain on the state payroll.

ISIS might also try tap into grievances in the impoverished south. Neither rival government has any authority in the remote, desolate area where dozens have been killed since last week in clashes between two tribes, the Tuareg and Tebu.

“ISIS-linked militants may seek to take advantage of feelings of marginalization in the southwest, particularly among members of the Tuareg ethnic group, to recruit fighters and hold territory,” said Geoffrey Howard, Middle East and North Africa analyst at London-based Global Risk Analysis.

As for Derna, ISIS has confirmed in a video that it has pulled out its fighters. But the fighting is not over yet. Military units loyal to Libya’s internationally recognized government based in the east since losing control of Tripoli a year ago to a rival group said they had now surrounded Derna.

“Islamic State aren’t many and they don’t have petrol to move around,” said local military spokesman Abdul Karim Sabra, using the militant group’s latest name. “They don’t have military vehicles either. They get around in fertilizer trucks.”

But clashes between ISIS and eastern army units aligned with the internationally recognized government outside Derna, and several car bombs going off inside the city, killing 10 people and blamed by residents on ISIS, suggest the military encirclement has not been effective.

ISIS can always seek refuge in the Green Mountain hinterland – a hideout for independence hero Omar al-Mukhtar for years when fighting the then-Italian colonial regime.

Since the eastern army units and the Abu Salim fighters treat each other as enemies, and as long as these regional military forces do not try to venture into Derna, it may well remain a playground for radical Islamists.

“Everything in Libya is fragmented, everything is localized, so it’s difficult for any group to expand.”

It also remains to be seen whether life will improve for people in Derna. “Shops and banks have reopened [since ISIS pulled out] but there is lack of medicine in hospitals,” said the local resident, who asked not to be named for his own safety.