You are here: Home / MidEastGulf / Explosives and materials for ISIL caught on camera exiting Turkey to Syria 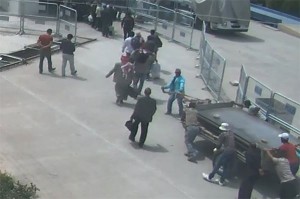 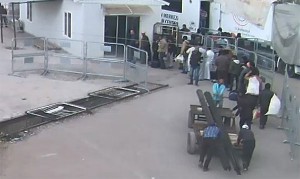 Images captured from CCTV footage from the Turkey’s Akçakale border gate with Syria, located in Şanlıurfa province, shows material enough to fill up numerous trucks being pushed by people dolly after dolly through the border gate, heading for Islamic State of Iraq and the Levant (ISIL) controlled regions in Syria, where they are weaponized by the militants. All the more scandalous, Turkish border security teams and customs officials are seen standing and watching.

The material includes metal plates weighing 400 to 500 kilograms which ISIL’s mounts on vehicles as armor, construction pipes used as barrels for firing mortars, and electric cables used in explosives.

The quantities being transported on a day to day basis are massive. Two trucks worth of fertilizer used in explosives, in addition to materials, such as electric cables and fuses, enough to fill a truck each, are passing through Turkey’s Akçakale border, heading for ISIL controlled parts of Syria on a day to day basis over two months.