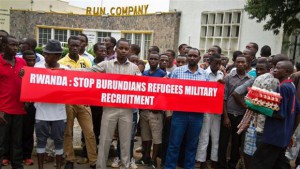 Explosions and bursts of gunfire have rocked several neighborhoods of the Burundian capital, Bujumbura, leaving at least one person dead as UN Security Council delegates arrived in the East African country to put an end to months of political instability.

According to Press TV, on Thursday evening, security forces shot and killed a young man in the northeastern Mutakura neighborhood of Bujumbura following the explosion of a hand grenade in the area. Another person sustained gunshot wounds in the same area.

Residents said the sound of blasts and skirmishes could be heard across the capital, namely in the central Bwiza district and the southern Musaga neighborhood, between 6:30 p.m. and 8 p.m. local time (1630-1800 GMT).

The developments came shortly after a Security Council delegation arrived in Bujumbura to press government officials to engage in negotiations with opposition figures, and agree to the deployment 5,000 peacekeepers in a bid to put an end to the deadly violence that has beleaguered Burundi since April last year.

Hundreds of people took to streets in Bujumbura on Thursday to express their resentment over what they described as meddling in Burundi’s domestic affairs.