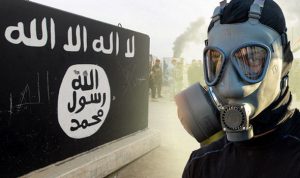 Islamic State’s toxic gases expert was killed along with three of his guards while manufacturing missiles loaded with toxic gases, southwest of Kirkuk, a security source said according to iraqinews.com.

“A blast occurred on Thursday at one of the IS sites in the military district in Hawija, southwest of Kirkuk, which killed the group’s toxic gases expert called abul Qa’qa’ al-Muhajir along with three of his guards,” the source told AlSumaria News. “The explosion took place after the so-called toxic gases brigade was working on missiles loaded with toxic gases.

The source, who preferred anonymity, said “al-Muhajir, who is close to the group’s supreme leader Abu Bakr al-Baghdadi, is considered one of the group’s prominent toxic gases expert.”

Earlier this week, the group’s Islamic police chief was killed, while five others were injured as an airstrike targeted the group’s rest house in Hawija.

Hawija, located west of Kirkuk, have been held by IS since mid-2014, when the group emerged to proclaim an Islamic “caliphate” in Iraq and Syria. The group executed dozens of civilians and security members there, forcing thousands to flee homes.

There has been pressure on Iraqi government to hasten with invading Hawija, given the humanitarian crisis people were experiencing under the group’s rule. Further offensives are expected to be launched across Iraq.