You are here: Home / MidEastGulf / Explosion at Shiite mosque in Kuwait, at least 7 dead 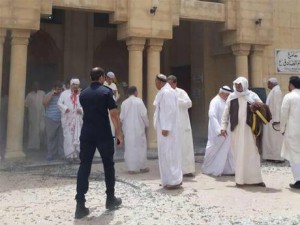 An explosion hit a mosque in Kuwait’s capital during Friday prayers. There were a number of casualties, al-Arabiya and Al Jazeera reported. The mosque is used by Kuwait City’s Shiite community.

Al-Sadeq Mosque is located in a busy district in the city’s east, and is one of the largest Shiite mosques in Kuwait.

Friday midday prayers are typically the most crowded of the week, and attendance increases during the holy Muslim month of Ramadan, which started last week.

No one has claimed responsibility for the attack. However, Islamic State (IS, formerly ISIS/ISIL) was responsible for two different bombings at Shiite mosques in Saudi Arabia last month.

The first Saudi Arabia blast killed around 20 people during Friday prayers, prompting Kuwait’s Foreign Ministry to denounce the attack as a “heinous crime against innocent worshippers.”

That same week, a second blast in Saudi Arabia killed four people at a Shiite mosque.