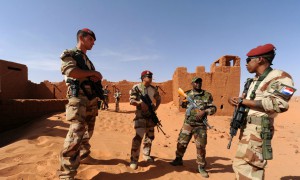 French bombs have been falling on Syria since the end of September, reinforcing France’s tough new image in the international and English-speaking press. The French have been known for many years as “cheese-eating surrender monkeys” owing in part to their refusal to participate in the 2003 invasion of Iraq. This new intervention further contributes to France’s transformation from a caricature into “frogs of war.”

France’s absence in Iraq might make its recent interventionism seem surprising. However, Iraq is the exception that proves the rule: France refused to join the 2003 coalition not out of pacifism or cowardice, but because it viewed the intervention as illegal, illegitimate, and potentially counterproductive (doubts that were subsequently proven justified). France conducted a large number of external operations since the end of decolonization, mostly in Africa including in Benin, Congo, Côte d’Ivoire, Djibouti, Eritrea, Ethiopia, Liberia, Democratic Republic of the Congo, Rwanda, and Somalia. A sizable number of French operations also took place in the Middle East: in Lebanon (since 1978), the Egyptian Sinai (since 1982), Iraq (1990-1991), as well as in Cambodia (1992-1995), the former Yugoslavia (1992-2014), Afghanistan (2001-2012), Colombia (2003), Haiti (since 2004), and the Indian Ocean (since 2008). In the last few years, French interventionism accelerated: Libya in 2011, Mali in 2013, Operation Barkhane in Mali, Chad, Niger, Mauritania, and Burkina Faso since 2014, the Central African Republic (CAR) in 2014, Iraq in 2014, and as of this week, Syria, where France had almost intervened following the chemical attacks of August 2013.

How can this apparent evolution be explained? “French interventionism” is nothing new, but this international activism and its sudden visibility, particularly as seen from the United States, is the result of a combination of factors.

First, France stepped into the gap created by the end of the Cold War, which, like the fall of Napoleon or the end of the Second World War, was seen as the beginning of a new era. It was also a fresh start for the United Nations. As Secretary General Javier Pérez de Cuéllar claimed in 1991, “the extinction of the bipolarity associated with the cold war has no doubt removed the factor that virtually immobilized international relations over four decades.” While the UN Security Council only authorized 14 peacekeeping operations in its first 40 years of existence, five operations were authorized in 1988 and 1989 alone. Between 1945 and 1990, the traditional opponents to the concept of intervention were the Eastern Bloc, weak states in the southern hemisphere, and young states anxious about their sovereignty. However, the end of the century heralded the collapse of the Eastern Bloc, the rise of democracy in the global south, the maturing of young states, the evolution of international law to increasingly concern itself with individuals as well as states, and the greater media visibility of humanitarian crises that compelled politicians to take action. In other words, the international obstacles to interventionism disappeared.

Second, with the Cold War in the past, interventionism took on a new importance for France as it sought to maintain its status in an increasingly competitive international environment. Rachel Utley explains,

This was most symbolic in respect of France’s permanent seat on the United Nations’ Security Council, as suggestions that economic giants such as Japan now had a greater claim to that position than a medium-sized, albeit nuclear-armed, power such as France.

France’s competitive advantage lay in its military power, which it thus needed to demonstrate. Intervention was therefore used as a way of preserving French prestige in a transforming world. Proving the value of its military power was even more important in a world where nuclear tensions had largely dissolved with the collapse of the Soviet Union. France’s nuclear force greatly contributed to its status during the Cold War, but suddenly seemed less relevant. It may have incited French leaders to employ conventional military means to demonstrate its power and achieve results.

The Roots of French Interventionism

The first driving force behind French interventionism is France’s image of itself as a great nation, “home of human rights,” bearer and defender of universal values. This doctrine developed from the intervention d’humanité (humanitarian intervention) of the late 19th and early 20th centuries to the droit d’ingérence (right to intervene) of the 1980s and 1990s. Irrespective of the sincerity of its exceptionalist convictions, these humanitarian convictions became part of the French identity and therefore part of French national interests (much as in the United States). The guilt felt from allowing the Rwandan genocide to occur reinforced French humanitarian convictions and led to an obsession with preventing “another Rwanda.” This explains the recent intervention in the CAR, for instance, a country in which France has very few material interests, but an overriding interest in not being the country that allows another genocide to occur in a former colony toward which it feels a special responsibility.

On a more realist note, the desire to preserve its sphere of influence in Africa and the Middle East also plays a role in French interventionism. Owing to its colonial heritage, France continued to maintain a network of special contacts and partners in these regions that supported the political and financial interests of many significant groups in France.

The desire to preserve its independence, especially against American influence, is another important factor. Though France and the United States remain ideologically very close owing to shared universalist, exceptionalist, and interventionist self-images, these similarities sometimes lead to competition rather than cooperation.

Finally, Paris acts because it can. France is part of an exclusive club of military powers capable of deploying first into a theater of operations and projecting power globally. This ability, as illustrated by the expeditionary campaign in Mali, provides an incentive to intervene in and of itself.

The Reasons for Acceleration Since 2011

While the English-speaking media often interpret the recent multiplication of French interventions as proof that President François Hollande is a strident neoconservative, French interventionism is not the product of an ideological shift. Rather, the French political left and the right share a perspective on foreign affairs and, contrary to another common fabrication, neither Hollande nor Foreign Minister Laurent Fabius are surrounded by “neocon” advisors. Furthermore, French foreign policy does not satisfy two of the five neoconservative criteria: internationalism, supremacy, unilateralism, militarism, and democracy. France does not practice unilateralism and is not militarist. Its defense budget accounts for 1.8 percent of GDP, beneath its nominal commitments to NATO’s recommended 2 percent, and British spending of 2.1 percent — all of which means that France does a lot with very little.

The real reasons behind the acceleration in French interventions since 2011 lie elsewhere.

Greater global instability, as demonstrated by the proliferation of crises, means that there are objectively more reasons to intervene now than there were 10 years ago. This greater instability is the result of several factors. First, an increasing diffusion of power caused by the erosion of American unipolarity, the emergence of powerful states, the increasing number of non-state actors and transnational armed groups, and the democratization of destructive technologies and information, which allows individuals and small groups to use military force more easily. Thus, Western states with more limited means must contend with a greater number of adversaries.

Second, recent instability stems in part from the absence of usual regional mediators, such as Egypt and Turkey, who are either preoccupied with internal political and security challenges or merely ambivalent. Third, the “effect of diversion” means that the more crises there are, the less attention each receives. New crises grow because they are overshadowed by others.

France also occasionally intervenes following the inaction of others. Obama’s America is a “reticent power,” more discreet, though no less engaged. The United States has always oscillated between phases of introversion and extroversion, and its current phase is nothing more than an ordinary stage in the cycle. Rather than withdrawing from the world, the Obama administration simply started using force with greater discretion. Its subtle strategy, based on the trinity of drones, special forces, and cyber, demonstrates a shift from the large land-based deployments of the Bush era, but does not amount to disengagement.

Moreover, the United Kingdom also suffers from a temporary eclipse after its armed forces were left weakened by campaigns in Iraq and Afghanistan, not to mention severe defense cuts. British capacity had already been called into question by a need for reinforcement by the United States in Iraq and Afghanistan. The United Kingdom’s strategic crisis redounded somewhat to France’s benefit, as French performance in Mali garnered America’s interest and endorsement. Furthermore, the French–American counterterrorism partnership in the Sahel reinforced military links between the two countries.

There is also no such thing as “European defense.” To fight together, it is necessary to either have shared fears or shared objectives, both of which the European Union lacks. France has committed itself to military action because, unlike the majority of European states, it has interests in Africa. It distinguishes itself from other risk-averse European states or Brussels by an acceptance of greater risk.

Avoiding the loss of French influence is also an important factor explaining contemporary interventions. France still possesses numerous assets that make it a global power, including its permanent seat on the UN Security Council, its military power (nuclear and conventional), its diplomatic network (the second largest in the world), its transnational companies, its space program, the francophonie, its maritime resources (the second-largest exclusive economic zone in the world), and its soft power. Yet in a decreasingly “Western” world — and especially with decreasing European influence — France’s relative importance is falling. Its military activism helps compensate for this.

There are also the usual domestic political reasons. Nicolas Sarkozy used the Libya intervention to consolidate his presidential stature and restore the reputation of French diplomacy after its failures in Tunisia and Egypt. Hollande has equally benefited from external operations (Mali, Barkhane, the CAR, Chammal, and Syria), which were more widely supported than his domestic politics. Hollande has also been criticized for being soft and indecisive, and so uses French military power to correct this image. Moreover, Foreign Minister Fabius and Defence Minister Jean-Yves Le Drian are probably the strongest and most influential ministers in Hollande’s government, which predisposes the current executive to international activism.

Current domestic threats give another reason to intervene abroad, as external crises and internal security are deeply interrelated in France. More interventions take place in response to a greater threat to national security. The intervention in Mali was already justified not only by the will to assist the Malians in their fight against jihadists, but also by the will to avoid having a terrorist safe heaven that could threaten others, including France. France has been hit by terrorism four times this year (in Paris in January, in Villejuif in April, in Isère in June, and on the Thalys train in August). It now deploys more soldiers in domestic anti-terrorism patrols (10,000 troops in Operation Sentinel) than externally (7,000 in five current external operations, but more than 12,000 others in 10 permanent overseas missions). It is that level of threat that triggered the decision to extend the strikes against the Islamic State to Syrian territory. Politically, this last intervention is justified by the need to prevent attacks in France that might be planned, organized, and directed from Syria. Its official legal basis, though, is not individual but collective self-defense, i.e. assisting Iraq in accordance with its requests.

French military intervention is not a novelty; rather, it is based on a long tradition and deep expertise. Nevertheless, the international situation and the current French political context together give French interventionism a new visibility, particularly in the United States. An entire generation of American decision-makers had been socialized to dismiss the “cheese-eating surrender monkeys” following France’s refusal to intervene in Iraq. They are now discovering that French foreign policy is compatible with Washington’s. The question is to what extent this renewed Franco–American friendship will be durable, and whether it will influence America’s privileged partnerships in the Euro-Atlantic zone. (Warontherocks)