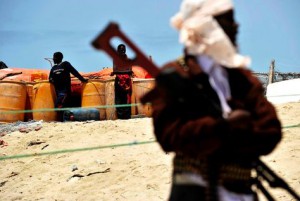 International maritime groups on Tuesday amended the boundaries of a high-risk security zone in the Indian Ocean, in a move expected to streamline trade between India and the Gulf but increase the risk of attacks by Somali pirates.

The reduction of the BMP4 High Risk Area (HRA) – which has been in place since 2012 to indicate piracy-prone waters in response to an increasing number of attacks on trade vessels at that time – came into force on December 1, following intense lobbying by the Indian government.

India had claimed the zone had the effect of diverting ships along the Indian coast, complicating trade routes and causing congestion and collisions.

In a statement issued in October, India’s Ministry of Shipping said: “The extended HRA came almost near the Indian coastline up to as close as about 35 nautical miles from the baseline. This was an unwarranted encroachment into India’s Exclusive Economic Zone (EEZ).

“International maritime traffic density came hugging the Indian coastline to avoid the HRA. This led to maritime congestion culminating in three reported instances of collisions between merchant ships and fishing vessels and the fatalities of five Indian fishermen.

“It also led to the proliferation of armed security guards on board merchant vessels to deter piracy attacks and hijackings. There have been cases of firing by guards on Indian fishing boats and a couple of Indian fishermen have lost their lives.

“This has further led to an increase in the presence of unregulated foreign owned and operated floating armouries near India’s coastline, potentially jeopardising Indian maritime security interests.”

India argued that the Indian Navy and Coast Guard had provided escorting facilities to ships in the Arabian Sea, as well as 24-hour security to foil any potential attack. As a result, no pirate attack or hijacking had occurred in the last three years, it claimed.

In October, an agreement was reached with the Contact Group for Piracy off the Coast of Somalia (GCPCS) and other international maritime authorities to shrink the HRA away from India.

The move is expected to speed up trade between India and the Gulf as ships take a more direct route, however, security experts have warned it could make them vulnerable to attack by “opportunistic” Somali pirates.

It could also either push up insurance costs for ships passing through the HRA or prompt some to continue sailing close to India to avoid any higher insurance costs.

Gerry Northwood, COO of UK-based maritime security company MAST and a former Royal Navy counter-piracy commander, told Arabian Business: “With the new HRA in place, ship owners may start to take a more direct route between the Gulf of Oman and the southern tip of India. Previously, many vessels were routing along the Indian coast to avoid the HRA and this was disrupting Indian coastal traffic and fisheries.

“On the other hand, should vessels see this reduction as a green light to take a more direct route between the Gulf of Oman and India, I believe they should continue to think very carefully about the level of risk to their vessel.

“Somali pirates have previously demonstrated that they can operate in the centre and northern reaches of the Indian Ocean, and vessels that are high risk with a low freeboard and slow speed should continue to take armed security in that area.”

He added that the HRA reduction will be watched closely by the insurance industry and wider business community, as “any return to the level of piracy seen in the western Indian Ocean in 2011 and 2012 would have a very detrimental effect on insurance rates and some companies’ revenues.”

Somali piracy cost the global economy a reported $6 billion in 2012. The Joint War Committee at global insurer Lloyd’s of London is due to meet later in December to discuss the likely financial impact of the redrawn HRA in the Indian Ocean.