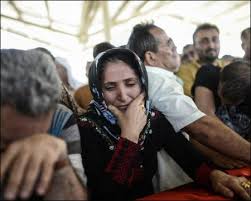 The United State did not oppose Jihadists’ actions against Syria, and only attacks on the Kurdish positions made Americans use force, turkologist Hakob Chakryan said.

He recalled that the Kurds are willing to fight, and the bloody clashes between Kurds and Turkish police officers occur every day.

The expert believes that President of Turkey Recep Tayyip Erdogan organized attacks on Kurds with the help of the Islamic State. However, on July 9 Jihadists declared war against Turkey, he added.