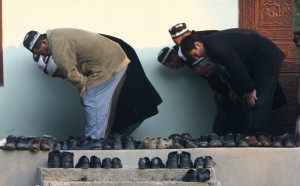 Farrukh Sharifov, a 25-year-old Tajik who repented after joining the Islamic State group in Syria, spoke softly as he addressed a room full of journalists and police in his Central Asian homeland.

“Hundreds and hundreds of young men from the countries of Central Asia go to war in Syria,” Sharifov warned at a press conference last week called by Tajikistan’s authoritarian government.

Several days later, reports claimed a top police commander had joined the jihadists in the Middle East, sparking even more alarm over IS’s potential penetration in the majority-Muslim country of eight million.

Ex-Soviet Tajikistan, where remittances from migrants working in Russia account for around half of economic output, is the poorest of five former communist republics in Central Asia.

Sharifov, who returned home on May 6 after escaping IS, said the group had its sights on the region, echoing President Emomali Rakhmon’s warnings that cast Islamic radicalism as the country’s main challenge.

Emissaries from the IS group — which Sharifov condemned as “un-Islamic” and “evil” — are looking to “direct the flames of war towards ex-Soviet countries,” he said.

There are no exact figures for how many people from the five ex-Soviet Central Asian states are now fighting in the Middle East, but the International Crisis Group (ICG) says between 2,000 and 4,000 people may have travelled to Syria and Iraq since 2011.

Tajikistan, which says 386 of its nationals are living in the two countries, has launched a crackdown on Islamism at home, with some accusing authorities of going too far.

The government is offering amnesty to repenting IS returnees and waging an aggressive media campaign against the group.

On the street, authorities are even forcibly shaving men’s beards, imposing restrictions on the annual Hajj pilgrimage and campaigning against the hijab.

“It seems likely that appearing in front of the media was part of Sharifov’s plea bargain,” said Edward Lemon, a researcher at the University of Exeter tracking Tajik fighters in the Middle East.

Fears have multiplied since the interior ministry confirmed Tuesday that a special forces commander, Gulmurod Halimov, had been absent since the beginning of the month.

Citing sources in the security services, Tajik media claim he and several others left the country to fight for IS, after spreading the group’s ideas among friends and subordinates.

“He has not been at the service since the beginning of May,” a spokesperson told AFP. “Whether he is alive or not, or where he is, we do not know.”

Sharifov claims he was recruited by an old classmate who “declared her love for him” via the Russian social network Odnoklassniki (Classmates).

Sources close to Halimov told local media he had combed the Internet for information about the group and its tactics.

IS has previously released footage purporting to show adult and child recruits from Central Asia.

One boy, who identified himself as Abdullah from Kazakhstan, was shown in a January clip apparently executing two alleged Russian spies.

IS is a “new threat” to the region, said ICG Central Asia director Deidre Tynan.

“Their propaganda materials are more sophisticated, and they have more channels to reach Central Asians of widely varying backgrounds,” she added.

Critics say Central Asian governments are using the international spotlight on IS to justify increasing repression of religious groups, undermining the sanitised version of Islam they promote.

Across the region authorities have moved to ban websites and block social networks viewed as furthering the IS cause.

Turkmenistan and Uzbekistan are among an elite group of religious freedom offenders deemed countries of “particular concern” in an annual report prepared by the US State Department.

Uzbekistan has used state-produced documentaries to shame citizens it said were arrested for attempting to join IS and carry out terror attacks at home.

But analysts in Tajikistan, which last week sentenced 19 people to prison on extremism charges with terms ranging between 9.5 and 17.5 years, said the country’s population is vulnerable to the group’s lure.

“Unfortunately our country is in a transitory period with the poverty level around 32 percent,” Khudoberdi Kholiknazar, director of the Centre for Strategic Studies under the President of Tajikistan, told a round table this month.

“Various forces use high rates of unemployment to ensnare our people with financial enticements.”