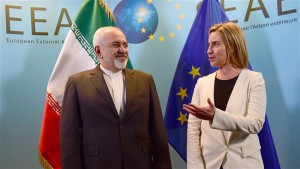 Mogherini spoke to reporters ahead of a meeting in New York with Iranian Foreign Minister Mohammad Javad Zarif focused on finalizing the nuclear deal reached this month and regional crises.

A final nuclear deal with Iran “could open the way to a different role for Iran in the region,” Mogherini told reporters at UN headquarters.

Arguing that it would be “naive” to ignore the Islamic republic, Mogherini said the best approach would be to “call on Iran to play a major, a major, but positive role in the region.”

On Syria in particular, Iran can “encourage the regime to participate in a Syrian-led transition,” Mogherini said.

UN peace envoy Staffan de Mistura will on Monday begin a new round of talks in Geneva with various parties to the Syrian conflict with a view to launching full negotiations to end the four-year war, possibly in late June.

De Mistura said Iran was invited to take part in the discussions, the first since the second Geneva conference mediated by Lakhdar Brahimi collapsed in early 2014.

But the envoy also told the Security Council during a closed-door meeting that prospects for a political transition were slim.

Iran was excluded from two peace conferences held in Geneva on Syria.

“I’m confident that we can proceed with the good work,” she said.

Iran and the five permanent members of the UN Security Council — Britain, China, France, Russia and the United States — plus Germany are drafting a final nuclear accord due by June 30.

The agreement is intended to ensure the wholly peaceful nature of Iran’s nuclear activities in exchange for the lifting of international sanctions imposed since 2006.