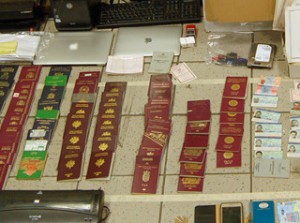 Europol’s director Rob Wainwright said ISIS had taken a “strategic decision” to send its fanatics to attack the continent in an attempt to distract attention from battlefield defeats in its heartland.

He in an interview with the Standard at Europol’s HQ in the Hague said some ISIS extremists were using fake Syrian passports in a bid to arrive undetected with a small but increasing number posing as refugees. Others were exploiting the “industrial scale” production of false documents by criminals to obtain EU passports and move freely over the continent.

Mr Wainwright said Europe also faced the return of thousands more extremists as ISIS crumbled in Syria in a “long, long struggle” that will pose an “onerous security challenge” for years.

His comments come amid reports by the Italian newspaper La Stampa that fake passports intended for use by ISIS extremists were found by law enforcement staff at refugee camps in Greece.