You are here: Home / Europe / Europol admits ISIS actively targeting refugees to carry out terrorist attacks in the EU 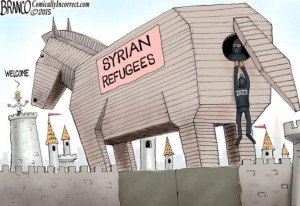 Europol and Frontex, Europe’s  border and coast guard agency, are finally admitting that their intelligence indicates coordinated efforts on the part of ISIS to recruit asylum seekers, both in Syria and in migrant camps after they’ve already reached Europe, to carry out terrorist attacks, like reported zerohedge.com.

In a report published by Europol, counter-terrorism experts warn that, among other things, “Syrian refugee diaspora may become vulnerable to radicalisation once in Europe and may be specifically targeted by Islamic extremist recruiters.”

The report goes on to note that “German authorities were aware of around 300 recorded attempts made by jihadists to recruit refugees” as of April 2016 while Merkel continued to relentlessly push her “open-border” policies.

The majority of attacks carried out in the name of IS appear to have been masterminded and performed by individuals who were inspired by IS, rather than those who worked with the terrorist organisation directly. Intelligence suggests, however, that IS has also put together teams in Syria which are sent to the EU tasked with carrying out attacks. It is believed that this ‘external terrorism network’, began sending fighters abroad two years ago.

Given that it is in the interests of IS to inflame the migration crisis to polarise the EU population and turn sections of it against those seeking asylum, there is a risk of some infiltration of refugee camps and other groups. The extent of this is unknown, however, making the subject susceptible to exaggeration and exploitation especially by populist factions and (extreme) right-wing parties. A real and imminent danger is the possibility of elements of the (Sunni Muslim) Syrian refugee diaspora becoming vulnerable to radicalisation once in Europe and being specifically targeted by Islamic extremist recruiters. It is believed that a number of jihadists are travelling through Europe for this purpose. According to unconfirmed information, German authorities were aware of around 300 recorded attempts made by jihadists to recruit refugees who were trying to enter Europe by April 2016.

Moreover, Europol notes that the power vacuum in Libya has resulted in the country becoming a “springboard” for “EU foreign terrorist fighters who, on returning to Europe, plan further terrorist attacks.”

CT experts are concerned that Libya could develop into a second springboard for IS, after Syria, for attacks in the EU and the North African region. Since mid-2015 Libya has become a major destination for IS fighters in its own right and is believed to having become a hub for EU foreign terrorist fighters who, on returning to Europe, plan further terrorist attacks.

Finally, the report warns that recent success in hitting numerous targets across Europe will only encourage further attacks which are likely to become more violent and sophisticated over time.

The success generated by these terrorist attacks, as seen from an IS perspective, will encourage the group to hit more targets in the EU. Although France appears to be the primary focus of IS, the organisation has threatened all countries that are part of the US led coalition against IS in Syria and Iraq, including Germany, the UK and other Member States, which have specifically been mentioned as enemies of IS in several video messages.

New attacks by both terrorist groups and lone actors are thus to be expected, most probably following the patterns that have been used in earlier attacks. New variations in attack, for example in the use of car bombs, may also develop.

And while many people have pretty much assumed most of the “findings” above from the “intelligence community,” we guess it’s better that the truth is being revealed later rather than never.  Hopefully Merkel gets a chance to peruse the report before she becomes the latest prominent European politician to find herself without a job.