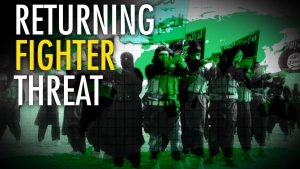 Gilles de Kerchove told The Associated Press in an interview that there hasn’t been a massive flow of ISIS fighters returning to Europe as many had feared following the group’s loss of territory in Syria and Iraq, adding that the intelligence services describe the fighters‘ return as “more a trickle than a flow”, like reported by cbsnews.com.

However, people inspired by the ideology remain a threat and the group is likely to entrench in other parts of world with “weak governance” such as Libya or Afghanistan, the EU official said.

De Kerchove was in Turkey for talks on enhancing cooperation against terrorism. He spoke with the AP on Tuesday but his comments were under an embargo set by the EU’s office in Ankara until Thursday.

ISIS has been driven from more than 96 percent of the large parts of Iraq and Syria it once held, crushing its goal of establishing a “caliphate” in the region.

Raqqa, the group’s de-facto capital in Syria, fell to Kurdish-led forces on Oct. 17, four months after operations to reclaim it began. The city was the group’s hub of operations, and its capture was a major symbolic blow.

“With no physical ‘caliphate’ anymore, it will be much more difficult for the organization to repeat what they have done and attract so many people,” de Kerchove said. “That does not mean that the game is over. We still have to address the ideology. More and more, we see in Europe (people) inspired by terrorism, home-grown terrorism.”

He said ISIS “will probably develop in one way or the other in some parts where you have weak governance. Either more weak governance like in Libya or Afghanistan or where it’s more difficult to police, like in the Sinai.”

An attack on a mosque in Egypt’s northern Sinai region last week killed more than 300 people.

Addressing the issue of dozens of European women and children in Iraq and Syriawhose husbands and fathers joined ISIS, de Kerchove said they should be allowed to return, but spoke of the necessity of putting in place effective rehabilitation programs.

He praised Turkey’s efforts to fortify its border with Syria, through the construction of a wall and improved policing.

“I wouldn’t say it’s impossible to cross the border but it’s now 10 times more difficult than it was before,” he said.