You are here: Home / Europe / Europe’s leaders try reaching out to Trump 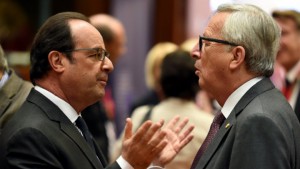 Long in denial about — and unprepared for — the possibility that Donald Trump could win the White House, Europe’s leaders scrambled Wednesday to offer olive branches to the U.S. president-elect in the hopes of continuing transatlantic business as usual.

The congratulatory sentiments from the continent’s top politicians came in varying degrees of enthusiasm — with most leaders expressing a desire to keep close ties with the Washington but also warning that it might not be easy.

The presidents of the European Council and Commission asked Donald Trump to come to Europe for an EU-U.S. summit at his “earliest convenience.”

In a letter saluting Trump for his surprise victory, Council President Donald Tusk and Commission chief Jean-Claude Juncker cited the importance of “cooperating closely,” and said the discussions they hoped he’d take part in would allow them to “chart the course of our relations for the next four years.”

Seeking to downplay concerns among many that relations between Europe and America would deteriorate under a Trump presidency, the two EU leaders wrote: “The strategic partnership between the European Union and the United States is rooted in our shared values of freedom, human rights, democracy and a belief in the market economy.”

They added that collaboration would be important in continuing negotiations on the Transatlantic Trade and Investment Partnership (TTIP) and joint efforts to address issues such as climate change and security threats.

“We should spare no effort to ensure that the ties that bind us remain strong and durable,” they wrote.

British Prime Minister Theresa May said the U.K. and the U.S. would remain “strong and close partners on trade, security and defense.” May said Trump had won a “hard-fought campaign” and that she wanted the “special relationship” between Britain and the United States to endure. Trump took inspiration during his campaign from the U.K.’s Brexit vote.

Germany’s Angela Merkel also promised to work with Trump. “The U.S. and Germany are connected through values: democracy, freedom and human dignity,” she said Wednesday. “Based on these common values, I offer close cooperation to the future president of the U.S., Donald Trump.”

Other European politicians sought to put a pro-EU spin on the result. Their argument: that Trump’s victory leaves an opening for Europe to take a higher-profile world leadership role — even as it struggles to manage its own crises and populist, anti-establishment uprisings.