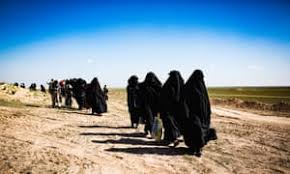 European powers warned against a threatened Turkish offensive in Syrian Kurdistan (Rojava) in northern Syria, saying the move, which has been facilitated by a US pullout, would boost the Islamic State group and spark a new refugee crisis, like reported by ekurd.net.

Turkey’s President Recep Tayyip Erdogan has long threatened that an operation against Kurdish militants in in Syrian Kurdistan, who only Ankara regards as terrorists, could come “any night without warning”.

A Turkish operation appeared imminent after President Donald Trump said Sunday that US forces in the region would stand aside — effectively abandoning the Kurdish People’s Protection Units (YPG) militia, which had been an important American ally in the fight against IS jihadists.

On Thursday, the Pentagon attempted to distance itself from any Turkish intervention, saying that it had “made clear to Turkey — as did the president — that we do not endorse a Turkish operation in Northern Syria.”

But with Turkey announcing plans to “clean up terrorists” in Syria — seen as a reference to the YPG — European governments were quick to express alarm.

IS ‘remains a threat’

The EU warned that a military operation in northeast Syria would lead to the “massive displacement” of refugees and risked “severely undermining” political efforts aimed at ending Syria’s eight-year-old conflict.

France, which has been hit by a wave of jihadist attacks since 2015, many of them claimed by or inspired by IS, warned that an attack on the Kurdish forces that led the fight on the ground against IS in Syria would bolster the Sunni radicals.

Seven months after IS lost its last Syrian stronghold the group “remains a serious threat to our national security,” the French foreign ministry noted, urging Ankara to “avoid any initiative” that could embolden the extremists.

Britain and Germany too voiced concern at the possible fallout of a Turkish attack on the fight against IS.

London said it would be concerned “by any unilateral actions” which threaten the progress made towards “the lasting defeat of Daesh (an Arabic acronym for IS)”, adding that the safety of Britain and Britons was the government’s top priority.

In Berlin, German government spokeswoman Ulrike Demmer noted that Turkey itself had been one of the casualties of the years of fighting in Syria, which had led to millions of refugees fleeing across the border to Turkey.

“But the victory of the Syrian Kurds over IS, backed by the anti-IS coalition, must not be jeopardised,” she warned, paying tribute to the role played by Kurdish forces in helping cause the collapse of the group’s self-claimed “caliphate”.

European governments are particularly worried that a Turkish offensive could allow some of around 2,000 foreign jihadists being held in Kurdish prisons to scatter and provide cover for Europeans among them who want to try slip back home.

The issue of what to do with the captured fighters has been a bone of contention between the Syrian Kurds and European powers, with countries such as Britain and France insisting that they should face local justice.

The Syrian Democratic Forces (SDF), the Kurdish-led militia that controls much of northeastern Syria, warned that surviving IS cells could take advantage of a Turkish operation to try to spring the extremists out of prison.

The camps where the fighters and their families are being held lie outside the area where the Turks have indicated they want to set up a “safe zone” inside Syria.

But in the event of a Turkish attack, the Kurdish forces “will have other things on their mind besides guarding jihadists”, Michel Duclos, a former French ambassador to Syria told AFP.

Duclos said Syrian Kurdish leaders would “certainly try to use them (the jihadists) as bargaining chips.”

“How? With whom? That will be the big problem for us,” he added, predicting that the Kurds would turn to Russia for protection.

Trump tweeted that it would be up to “Turkey, Europe, Syria, Iran, Iraq, Russia and the Kurds” to figure out what to do with the captured IS fighters.

French officials had previously voiced concern that the jihadists could end up in the hands of Russian-backed Syrian President Bashar al-Assad’s regime, which could in turn use them as leverage in negotiations with the West on Syria’s future.

Ankara has assured that it will not allow IS to return “in any shape or form.”

The Kurdish PYD and its powerful military wing YPG/YPJ, considered the most effective fighting force against IS in Syria and U.S. has provided them with arms. The YPG, which is the backbone of the SDF forces, has seized swathes of Syria from Islamic State.