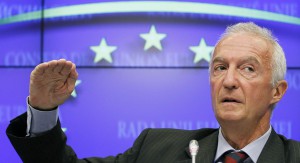 The Islamic State group remains resilient despite suffering military setbacks in Syria, and is recruiting a growing number of young men and women from Europe, according to Gilles de Kerchove, the European Union’s counterterrorism chief. Kerchove said in an interview with the Agence France-Presse (AFP) that thousands of Europeans have joined ISIS in Syria while many residents in Europe have been radicalized on the Internet.

About 4,000 Europeans are estimated to have joined ISIS, which continues to attract young people from European countries to join the jihad in the Middle East, Kerchove said, AFP reported on Thursday.

“There are still young Europeans who are leaving. They are increasingly young and there are many more women,” he told AFP. “The European Union is mobilized and the Paris attacks (in January) increased this mobilization, but that didn’t change things. We must continue the efforts because the threat remains serious.”

Kerchove also said that there was no evidence to show that ISIS is using migrant trafficking networks to slip jihadists into Europe, but the extremist group was profiting from people smuggling “as a source of financing.”

According to recent media reports, ISIS reaps millions of dollars by smuggling people from the Middle East and Africa into Europe.

When asked about the exact cause of the threat to Europe, Kerchove said that unidentified European fighters with a passport pose the greatest challenge. In addition, residents radicalized by ISIS through the Internet can also be used by the group to carry out terror attacks on home soils.

“There remains much to do, especially with the Internet,” AFP quoted Kerchove as saying. “The member states expect the European Union to intervene with Internet giants to remove illegal sites, carry out checks and develop a counter-narrative to prevent recruitment.”

According to Kerchove, EU needs to reinforce checks on European nationals at the borders to stop the return of European fighters. His statement came two months after Iran’s Defense Minister Hossein Dehghan warned that ISIS may soon send its fighters into Central Asia, India, China and Europe. Dehghan also urged world leaders to work together to create “a front of resistance” against the Islamic group.