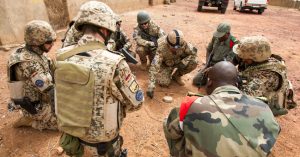 The Council extended the mandate of the EU training mission in Mali (EUTM Mali) for two years, until 18 May 2020. The Council also amended the mandate of the mission to include in its objectives the provision of advice and training support to the G5 Sahel Joint Force, as part of the EU’s ongoing efforts to support the G5 Sahel process, like reported by africa-newsroom.com.

The Council also agreed to allocate a significantly increased budget of € 59.7 millionto the mission for the period from 19 May 2018 to 18 May 2020, compared to € 33.4 for the current two-year period.

This decision means that the efforts carried out over recent months to regionalise the work of both civilian and military CSDP missions (EUTM Mali, EUCAP Sahel Mali and EUCAP Sahel Niger) in the Sahel will become more operational. The aim is to support regional security cooperation, as set out in the Council conclusions on Mali and the Sahel of 19 June 2017.

EUTM Mali assists in the reconstruction of effective and accountable Malian armed forces capable of ensuring the long-term security of Mali and, under civilian authority, restoring the country’s territorial integrity. To this effect, EUTM Mali delivers training to units of the Malian armed forces and aids the development of an autonomous training capability. The mission also provides advice to the Malian authorities on reforming the army.

The headquarters of the mission are located in Bamako, Mali. The commander of the mission is Brigadier General Enrique Millán Martinez, a Spanish national who took up his duties on 31 January 2018.

The mission is part of the EU’s comprehensive approach to security and development in the Sahel. There are two other CSDP missions in the region: EUCAP Sahel Mali, which supports the Malian state’s efforts to ensure constitutional and democratic order, implement the conditions for lasting peace and maintain its authority throughout the entire territory; and EUCAP Sahel Niger, which supports the fight against organised crime and terrorism in Niger.