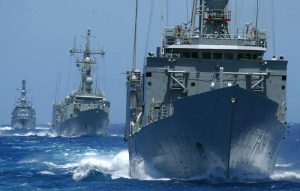 Just after the EU’s foreign policy chief Joseph Borrell urged Europe to “develop an appetite for power” to better chart its own independent course in solving various international crises impacting Europe, the EU has agreed to deploy warships in order to enforce a United Nations arms embargo on the war-torn country, like reported by zerohedge.com.

The EU has stressed, however, that this is not an extension of its prior controversial mission to rescue migrants and refugees in the Mediterranean:

Josep Borrell, the EU’s chief diplomat, announced that 27 foreign ministers had agreed to launch a new operation with naval ships, planes and satellites in order to enforce the UN arms embargo on Libya.

To counter objections that the operation could morph into a rescue mission, Borrell promised the ships would be withdrawn if they became “a pull factor” that encouraged people to attempt the risky crossing from Libya to Europe. This commitment helped lift opposition to the mission from Italy and Austria, whose governments had blocked an earlier compromise.

Going all the way back to the 2011 US-NATO intervention to topple Gaddafi, the north African country has existed in a state of anarchy with multiple governments and factions vying for control, and now Benghazi-based strongman Khalif Haftar is attempting to bring the country by force under his control in his bid to seize the capital.

This has set the stage for a major proxy war involving the UAE as the prime weapons supplier of Haftar, and Turkey as supplying weapons, drones, and even troops to the Tripoli Government of National Accord (GNA). Russia has also reportedly supplied Haftar’s army with mercenaries from the Wagner group.

The fighting in Libya as well as the external arms supplies fueling both sides of the conflict has become so bad that the United Nations has called an arms embargo recently in place “a joke”.

“The arms embargo has become a joke, we all really need to step up here,” U.N. Deputy Special Representative to Libya Stephanie Williams said days ago at an international security conference in Munich.

“It’s complicated because there are violations by land, sea and air, but it needs to be monitored and there needs to be accountability,” Williams added, and noted further that Libya has over the past multiple months of fighting been flooded with advanced weapons.

This newest EU operation appear’s the bloc’s attempt at a more muscular response in the wake of frustration over “not doing anything”.

Austria’s foreign minister, Alexander Schallenberg was quoted in The Guardian Tuesday as saying, “There is a basic consensus that we now want a military operation and not a humanitarian mission.”

The details of the new mission to block all arms going into Libya, dubbed Operation EU Active Surveillance, are as follows:

Ships under the new mission – to be known as Operation EU Active Surveillance – will patrol about 60 miles (100km) off the coast of Libya, an area of the Mediterranean that is the main route for weapons into the country.

An internal EU memo, released by the London-based civil liberties group Statewatch, underscores that the EU does not expect to be involved in rescuing people. “Naval assets can be deployed in the areas most relevant to the implementation of the arms embargo, in the eastern part of the area of operation or at least 100km off the Libyan coast, where chances to conduct rescue operations are lower,” it says.

It’s widely believed that should ‘mission creep’ occur and the European military ships get pulled into a costly ‘rescue mission’ upon possibly encountering stuck migrant ships in the area, the whole operation will lose political backing and momentum.

There’s also concern that the mere presence of EU ships will only serve to encourage more migrants to attempt the dangerous Mediterranean crossing.