You are here: Home / Europe / European prisons ‘ripe for radicalization’ 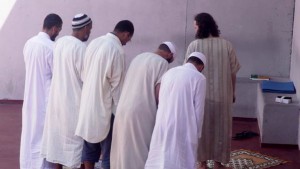 European prisons have become a hotbed for jihadists looking to recruit “angry young men” who are “ripe for radicalization,” according to a study released Tuesday by the International Centre for the Study of Radicalisation and Political Violence.

The British think tank found that the boundary between criminal gangs and jihadists is becoming increasingly blurred, with “up to 40 percent of terrorist plots in Europe” being partially financed by street crimes such as drug-dealing and burglaries, and adding that “in many European countries, the majority of jihadist foreign fighters are former criminals.”

It called the overlap between criminal gangs and jihadists “the new crime-terror nexus.”

Islamic State is the main driving force behind the phenomenon, the group said. According to the report, “jihadism offered redemption for crime while satisfying the personal needs and desires that led them to become involved in it, making the ‘jump’ from criminality to terrorism smaller than is commonly perceived.”

Of the 79 individuals profiled in the post-2011 report, 45 had been incarcerated before their radicalization. Of that group, 12 radicalized during their imprisonment.