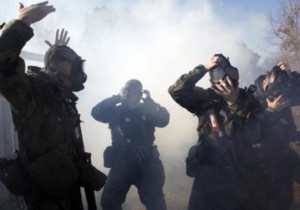 The European Parliamentary Research Service has published a briefing on the danger of a non-conventional weapons attack.

The briefing refers to an authoritative Europol  warning that not only Paris-like attacks are likely to be repeated – as the model was set by Mubai in 2008 – but that assailants could be using chemical substances or biological agents. The latter warning echoes the warning by the French Prime Minister, Manuel Valls, an event for which the French police is already preparing by testing in the use of antidotes. There is an established precedent with the 1995 attack in Tokyo. The use of nuclear material is also mentioned.

Citing Wolfgang Rudischhauser, Director of the Weapons of Mass Destruction (WMD) Non-Proliferation Centre at NATO Headquarters in Brussels, it is suggested that ISIL has a base of operations, sufficient material resources and, potentially, the know how to deploy such weapons. Among the volunteers to Iraq and Syria may be highly trained individuals. It is recalled that the laptop of a Tunisian physics and chemistry graduate recovered in Syria in October 2014 there was a 19-page “recipe” for the production of bubonic plague.

In addition, ISIL may have gained access to stock piles of such agents developed by the Saddam Hussein regime, including 40 kg of low enriched uranium from Mosul’s University. Similar material may have been obtained from Lybia.

Non-conventional weapons do not have to be necessarily drawn from the stockpiles of former dictators. Apparently, there are many chemicals used in industry that could be weaponized. Toxic Industrial Chemicals (TICs) abound. Finally, attacks on infrastructure – such as nuclear or chemical factories or aquifers, – could produce the same effect as a non-conventional weapons attack. According to a European Commission communique in May 2014, there is abundance of material and infrastructure that could be targeted.