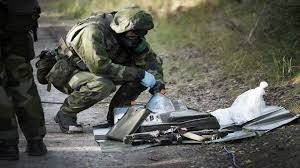 “I consider this to be highly significant as for the first time, the European Commission is proposing that medical preparedness for CBRN attacks is a high priority” for the European Union, said Steven Neville Chatfield, an independent consultant in biopharmaceuticals and a director for the Centre for Emergency Preparedness and Response in the United Kingdom’s Health Protection Agency.

The European Commission’s (EC) Action Plan to enhance preparedness against CBRN security risks is part of its anti-terrorism package released in October 2017, a strategy aimed at better protecting the more than 511 million citizens across the 28 member states of the European Union (EU).

Considering the current state of affairs, the terror-threat level in Europe requires immediate attention.
In fact, according to the EC’s plan, the EU faces a range of violent terrorist threats and attacks from networked groups and lone actors.

“Both terrorist groups and radicalized individuals have sought to carry out mass-casualty attacks in the EU with the aim of maximizing both the number of victims and the psychological and economic impact on society,” the plan states.

“I would describe the threat level in Europe as being high and evolving,” said Chatfield, who holds a PhD in microbiology and has published more than 100 papers in the biotechnology field. His previous roles include executive positions at Medeva plc, Microscience Ltd., and Emergent BioSolutions.

“There are several reports and studies that provide good reason to believe that threats from deliberate release of CBRN materials is credible,” he said, adding that future threats are likely to come from the use of chemical and biological weapons.

“Chemical weapons have already been used in Syria and Iraq and there are indications that organizations such as ISIS are experimenting with biological weapons,” Chatfield wrote in an email sent from London.
Comparatively, he thinks the threat levels are similar in Europe and the United States.

“Although it could be said that recent events in displacing ISIS from its strongholds in Iraq and Syria, leading to the return of a large number of European citizens that fought with ISIS, could increase the threat level in Europe,” Chatfield explained.

Action plan elements
There are several critically important elements of the EC’s action plan against CBRN security risks.
The EC’s proposal notes that attacks involving, for instance, “a radioactive dispersal device or an anthrax attack using unmanned aerial systems,” could be extremely high, and directly says that member states have an obligation to provide medical countermeasures.

“The Directive on Combating Terrorism includes for the first time provisions on all strands of CBRN terrorism,” according to the document. “It imposes obligations on Member States when it comes to the response to a terrorist attack, including an obligation to provide medical assistance to all victims. The initiatives proposed in this Communication will help Member States to meet their obligations to assist victims when it comes to an attack conducted with the CBRN materials.”

– There are credible indications suggesting terrorist groups might have the intention of acquiring CBRN materials or weapons and they’re developing the knowledge and capacity to use them;

– Member states should increase preparedness for cross-border threats to health via joint purchases of medical countermeasures; and

– Member states and the EC should develop a shared vision at the EU level on how to improve vaccine coverage in the EU and then take actions to strengthen vaccine supplies and stock management, and should increase the effectiveness of vaccine research and development.

“My opinion,” Chatfield wrote, “is that this is a recognition that stockpiles of specialist countermeasures — such as vaccines and antibody therapies — need to be established at EU level (as the U.S. has done through the establishment of the strategic national stockpile) in order to provide a full and effective response in the event of a CBRN attack.”

Unlike conventional medicines, some countermeasures — such as those for anthrax and botulinum, two of the biggest threats — may not be immediately available to member states in the aftermath of an attack, he added.

“They may take several months to manufacture and supply when in reality they would only be effective if used within days after the attack for which the ideal solution is the establishment of stockpiles at the EU level,” he said.

Additionally, the section of the Action Plan on developing CBRN Security Cooperation would call for several EU-U.S. workshops to be held and to “invite strategic partners to dedicated sessions of the CBRN Security Advisory Group where appropriate.”

Existing tools
The EC’s action plan — which Chatfield said is not a legislative proposal but rather a document that sets out the commission’s strategy and intentions — would be implemented in cooperation with the 28 member states.

“Previously this policy area was considered to be the responsibility of national governments,” explained Chatfield, who said the commission’s CBRN action plan could change after reviews are concluded by the Council of the EU and the European Parliament, which comprise the EU’s legislature.

However, a 2017 EU directive on terrorism is in place that provides guidance on how the member states may assist and support victims of terrorism, said Chatfield.

“Importantly, this directive also obliges member states to provide medical assistance (i.e. CBRN countermeasures) to all victims of terrorism,” he said. “In essence, this will underpin the legislative base for the action plan.”

Additionally, the EC’s 2014-approved procurement mechanism established a voluntary and centralized process for member states to jointly and collaboratively “engage in … the advance purchase of medical countermeasures for serious cross-border threats to health,” according to language contained in the Joint Procurement Agreement (JPA).

Specifically, the JPA is designed to strengthen the member states’ purchasing power and ensure equitable access to medical countermeasures like vaccines and antiviral medications that would be used in the event of a pandemic and “to protect their citizens against CBRN incidents,” said Chatfield.

“This is another tool that can be used in the implementation of the action plan,” he added.