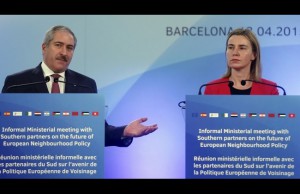 EU foreign policy chief Federica Mogherini called for stepped up cooperation and dialogue between Europe and its Mediterranean neighbours in North Africa and the Middle East to fight terrorism, wrote Daily Star.

Mogherini made the appeal at a meeting of foreign ministers and representatives from the 28 European Union member states and delegations from eight North Africa and Middle East nations of the southern rim of the Mediterranean.

“It is important to hear from you that your everyday greeting is ‘salam alaikum’, peace be with you, and this is the main message we Europeans need to know first of all, to restart intercultural learning that is important for prevention,” she told a news conference Monday.

“If we want to end jihadist terrorism, we have to go to the root of the question and favour intercultural and interreligious dialogue,” she added.

“All nations in the region are confronted with a fragile security situation which has worsened due to several armed conflicts, mainly in Syria and Libya.”

Foreign ministers and representatives from the 28 European Union member states took part in the gathering along delegations from Algeria, Egypt, Israel, Jordan, Lebanon, Morocco, the Palestinian Authority and Tunisia.

The EU’s other two southern partners, Libya and Syria, both torn by conflict, stayed away.

It was the first high-level meeting of the 43-nation Mediterranean Union since the body was launched in 2008 with the aim of creating a more equal dialogue between the wealthy EU and the poorer states that line the Mediterranean.

Mogherini said she would like to have such a minister-level meeting on a yearly basis.

“We must listen more,” she said.

Her views were echoed by Egyptian Foreign Minister Sameh Shoukry.

“We should speak clearly and freely about delicate subjects,” he said.

The EU has a budget of around 16 billion euros ($17 billion) for 2014-2020 for regional development projects and roughly two-thirds had been earmarked for its southern neighbours to curb the conditions that give rise to jihadism, a diplomatic source said.

“The best way to work together for the security of our region is to boost cooperation in all areas: security of course but also economic, cultural, political,” said Mogherini.

“We are watching a rise in radicalism on the part of our youths, who are following in greater numbers the call to jihadism in the north and south of the Mediterranean,” she added.

Around 1,500 Moroccans and 3,000 Turkish nationals have also departed for Syria.

Government officials worry that people who spent time fighting with jihadist groups will carry out attacks when they return to their home nations.

“We need to see how he can provide opportunities to youths so that they are not easy to be recruited by terrorism,” said Jordanian Foreign Minister Nasser Judeh.

The gathering came a day after two bomb attacks claimed by Egyptian jihadists loyal to the Islamic State group killed at least 14 people in the restive Sinai Peninsula.

Another bomb exploded at the gates of the Moroccan embassy in Tripoli in the early hours of Monday.

Spanish Prime Minister Mariano Rajoy warned that “terrorism is a challenge for all of us.”

“The Muslim world is a victim of it like the rest. No one should believe the lie of those who speak of a fight between Islam and the West,” he added.