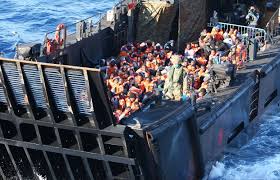 With the world still reeling from images of a drowned Syrian boy, European authorities say it is their top priority to fight an army of an estimated 30,000 people-smuggling suspects blamed for such tragedies.

Officials say the deadly business that may be worth billions of dollars is preying on the sheer desperation of growing numbers of people fleeing war and poverty in places like Syria, Afghanistan, Eritrea and Somalia.

But there is new urgency in the wake of cases such as the death of three-year-old Syrian Aylan Kurdi — found lifeless on a Turkish beach after the smuggling boat carrying his family to Greece sank in the Aegean Sea — and the deaths of 71 people in an airless van on an Austrian highway.

“It is the top priority for sure, not only for Europol but for all member states,” Robert Crepinko, head of the organised crime network at the European Union’s police agency Europol, told AFP.

“If you talk about the whole range of illegal migration across Europe, not only focusing on the Mediterranean, the number is 30,000 suspects.”

The EU launched a new naval mission against people smugglers in the Mediterranean in July, starting with an intelligence-gathering phase, before readying to take military action against trafficker’ boats, mainly off the Libyan coast.

The naval mission and Europol say they are cooperating through an office in Sicily to identify and dismantle networks of smugglers bringing refugees across the Mediterranean.

Crepinko added Europol will shortly open a cell in Piraeus, Greece, to tackle smuggling from Turkey.

But as only 3,000, or one-tenth, of the 30,000 suspects in Europe are specifically involved in moving people across the Mediterranean, Europol’s remit also covers other routes including the increasingly popular western Balkans into Hungary.

Smugglers are increasingly resorting to Facebook and other social media to advertise their services, negotiate prices, and arrange travel venues and times for migrants, the officials said.

Investigations are complex, with Europol’s Crepinko saying smugglers of different nationalities and religions operate in “fluid” groups who come together when there is business.

He cited the example of an alleged 16-member ring that was broken up in Greece recently with the arrests of two Romanians, two Egyptians, two Pakistanis, seven Syrians, one Indian, one Filipino and one Iraqi.

The gang allegedly smuggled mainly Syrians from Turkey to Greece via sea, air and land to Europe, providing the refugees and migrants with falsified documents, and making an estimated 7.5 million euros (about $8.4 million) during the few moths it was operating.

The task of European authorities is further complicated by the network of routes that desperate refugees and migrants take.

Frontex has discovered a network run by Eritreans leading from Eritrea to Libya through Sudan then onto Europe, while one of many others goes through Ghana, Burkina Faso and Niger.

Once in Libya, Cooper said, there are networks that specialise in sending refugees across the Mediterranean in overcrowded fishing boats or dinghies, which Frontex suspects “might be imported from China”.

She said Frontex has heard that smugglers have put migrants on the vessels at gunpoint when the latter realise how unseaworthy they are and refuse to board.

European Union officials say they hope to reach an agreement with African leaders on tackling smuggling networks during a crucial EU-Africa summit in November in Malta.

“We need to strengthen cooperation with some key countries which are springboards for this,” an EU diplomat told AFP.