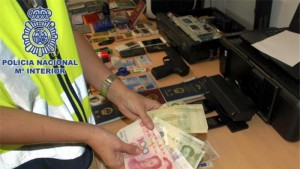 Leading financial institutions in Europe have joined an offensive to fight human trafficking by using data to spot irregular banking transactions that could identify criminal activity, organisers have said.

The initiative involving banks and the European Union’s policing agency Europol aims to help financial institutions develop “red flag” indicators to scan their systems for suspicious transactions and then alert the police.

The move came amid rising concerns about human slavery growing into a multi-billion dollar business in Europe, run by increasingly sophisticated gangs exploiting the EU policy of free movement for its people.

“As trafficking becomes more complex we have to build a broader alliance of institutions that will fight back and bring an end to modern slavery,” Europol director Rob Wainwright told the Reuters news agency on Tuesday.

“We see the problems getting much worse in terms of number of victims, illegal money that is being used, and the way in which organised crime groups are using more sophisticated techniques to recruit people, transport and exploit them.”

The European Bankers Alliance, launched on Tuesday, follows on from the success of a similar group set up in 2012 in the United States by Manhattan District Attorney Cyrus Vance that was spearheaded by the Thomson Reuters Foundation.

The US Bankers Alliance led to the publication of international guidance to help the financial industry identify and report transactions linked to trafficking and sparked a spike in the number of reports of suspicious activity.

Human trafficking has become a fast-growing crime worth about $150b a year, according to the International Labour Organisation, with an estimated 36 million people trapped in sex slavery, forced or bonded labour, or other forms of servitude.

Women and girls make up 80 percent of identified victims in the EU.