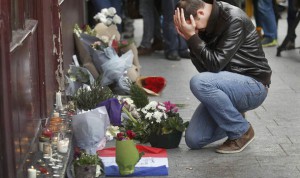 ISIS will carry out another “major” terror attack in Europe, the French prime minister has warned.

Manuel Valls said he wanted to be honest with the public and tell them to expect more attacks like the ones carried out by the terror group, also known as Daesh, in France in 2015.

Speaking at the Munich Security Conference in Germany on Saturday he said: “We are at war with terrorism; we need to be sincere with our people and we need to tell them there will be other attacks, major attacks – this is something we know for sure.”

Mr Valls told a group top defense officials and diplomats that after the attacks in the world had “entered a new era”.

The French prime minister pledged to committ military power to fighting ISIS but said countries also needed to tackle the radicalisation of youngsters and work towards peace in Syria.

Mr Medvedev hit back at his French counterpart, telling the conference there is no evidence his country is bombing civilians in Syria.

Government forces, aided by a Russian bombing campaign, are trying to trap rebels in Syria’s largest city Aleppo and cut off their supply route to Turkey.

Mr Medvedev said: “There is no evidence of our bombing civilians even though everyone is accusing us; that’s just not true.”

At the same conference, Mr Medvedev warned that Russia and the West are on the brink of a second Cold War.

ISIS terrorists tageted the French capital in a series of coordinated attacks on the evening of Friday, November 13 as friends and family enjoyed the start of the weekend.

Suicide bombers blew themselves up in cafes and restaurants and at the Bataclan Theatre, where rock band Eagles of Death Metal were performing.

The sick attacks killed 130 people and injured almost 400 others.

In January 2015, Paris was subjcted to another brutal assault when gunmen opened fire on the Charlie Hebdo magazine office, killing 10 journalists and two policemen, Express reported.