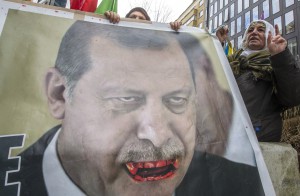 Turkish President Recep Tayyip Erdogan accused Europe on Sunday of abetting terrorism by supporting Kurdish militants and said he did not care if it called him a dictator.

Turkey drew international condemnation for the arrest on Friday of leaders and parliamentarians from the pro-Kurdish Peoples’ Democratic Party (HDP), the second-largest opposition grouping in parliament, as part of a terrorism investigation.

The government accuses the HDP of financing and supporting an armed Kurdish insurgency, which it denies. The HDP announced a partial boycott of parliament on Sunday.

The action against the HDP has heightened concern among western allies about the state of democracy in Turkey, a North Atlantic Treaty Organisation member that aspires to join the EU, and that is a buffer between Europe and the conflicts in Syria and Iraq.

More than 110,000 officials — from soldiers and judges to teachers and journalists — have been detained or suspended since a failed military coup in July, in what Erdogan’s critics say is a crackdown on all forms of dissent.

“I don’t care if they call me dictator or whatever else, it goes in one ear, out the other. What matters is what my people call me,” Erdogan said.

He and his government are furious at what they see as western criticism of their fight against the Kurdistan Workers Party (PKK) militant group, which is waging an insurgency for Kurdish autonomy.

Erdogan said the PKK, listed as a terrorist group by the EU and US, had killed almost 800 security force members and more than 300 civilians since a ceasefire in the largely Kurdish southeast collapsed in 2015.

Meanwhile, a PKK offshoot claimed responsibility for a car bomb in the southeastern city of Diyarbakir on Friday that killed 11 and wounded at least 100, hours after the HDP detentions, according to a website close to the militants.

Islamic State had also claimed the attack, according to the group’s Amaq news agency.

“Europe, as a whole, is abetting terrorism. Even though they declared the PKK a terrorist organisation, this is clear,” Erdogan said. “We see how the PKK can act so freely and comfortably in Europe.”

Turkey’s EU Minister Omer Celik has called European ambassadors to a meeting in Ankara on Monday to brief them on the latest developments, his ministry said.

HDP co-leaders Selahattin Demirtas and Figen Yuksekdag were jailed pending trial on Friday after refusing to give testimony in a probe linked to “terrorist propaganda”.

Ten other HDP legislators were also detained, though some were later released.

The US expressed deep concern, while Germany and Denmark summoned Turkish diplomats over the Kurdish arrests.