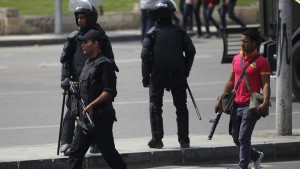 German Foreign Minister Frank-Walter Steinmeier said that the crisis in the Middle East could be solved through negotiations with Egypt because of the crucial role the country has been playing in the region, MENA reported.

During his first visit to Egypt, Steinmeier will be meeting Egyptian president Abdel Fattah El-Sisi and also a number of Egyptian officials to discuss deepening bilateral relations between both countries.

“Egypt is dealing with real terrorist threats and also social and economic needs for Egyptian youth; accordingly Germany and Europe are willing to show support to Egypt to overcome all challenges,”Steinmeier was quoted as saying to MENA.

He also said that the aim of his visit is to understand the vision of the country and what has been accomplished since the revolt in 2011 that ousted former autocrat Hosni Mubarak.

Steinmeier is also expected to meet with Al-Azhar Grand Imam Ahmed Al-Tayeb and a number of officials from political parties and civil society.