You are here: Home / Europe / Europe signs off on $38M donations to Lebanon for training security forces 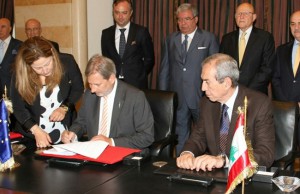 The EU signed a 15 million euro ($16,778,588) financing agreement for the training of Lebanon’s security forces, in a dedicated effort to bolster the country’s fragile stability.

The programs will be specifically designed to help security forces control the troubled eastern border, improve coordination and respond to the threat of chemical and biological weapons.

Johannes Hahn, commissioner for European Neighborhood Policy and Enlargement Negotiations, met with Prime Minister Tammam Salam Wednesday after signing the agreement. “The program is designed to leverage, wherever possible, greater coordination and interoperability between security sector agencies,” Hahn said in a statement.

In addition to the security grant, the EU donated 19 million euros ($21,254,754) for environmental projects targeting Lebanon’s heavily polluted coastline. Nabil al-Jisr, the head of the Council for Development and Reconstruction, signed the agreement for Lebanon.

Hahn and Salam then discussed regional politics and relations in a meeting at the Grand Serail, according to the premier’s media office.

A core aim of the agreement is to help Lebanon’s security forces work in concert to secure the porous eastern border, which has seen ongoing spillover from Syria’s bloody civil war. Last August, militants overran the border town of Arsal, and still hold 25 servicemen hostage on its outskirts.

It is hoped that by improving coordination, the security forces will be better able to fight organized crime, facilitate cross-border trade, and manage the influx of refugees and migrants in the east. The Internal Security Forces will also receive training on interacting with vulnerable groups in a professional manner.

Hahn said improving interoperability was “of particular importance in the context of the Syria crisis, and it will build on and consolidate ongoing activities supporting the institutional and organizational advancement of the security services, as well as the development of the dialogue with civil society.”

A second EU grant is aimed at rehabilitating Lebanon’s maritime ecosystem, and preparing the country for environmentally responsible oil and gas exploration.

The grant will finance the treatment and safe disposal of 2,600 cubic meters of waste that remain from the massive oil spill caused by an Israeli airstrike on the Jiyyeh power plant during the 2006 July War.

The spill precipitated an environmental disaster, as thousands of tons of oil leaked into the Mediterranean from the plant’s damaged fuel tanks.

In addition to healing damaged marine ecosystems and reducing pollution in coastal areas, the funding is intended to limit environmental damage from further energy exploitation.

“It will … support the Lebanese government in applying the highest environmental standards in the context of the future exploration and production of offshore oil and gas resources,” Hahn added.

The two donations come following a memorandum signed by Lebanon and the EU in October 2014, in which the both sides pledged greater collaboration.