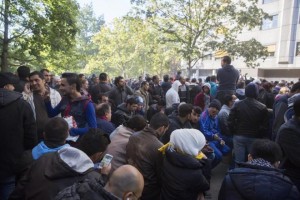 German authorities said they expect as many as 1.5 million asylum seekers to arrive in Germany before the end of the year. The Bild reported in its Monday edition the forecast, which is up from 800,000 to 1 million, has been classified as confidential, Reuters reported.

Some 630,000 refugees have entered the European Union illegally in 2015, the chief of Frontex said, according to Agence France-Presse Sunday. The figure comes amid a continuing crisis in Europe, with refugees flooding in from countries like Syria, Libya and Eritrea.

“We registered about 630,000 illegal border crossings as of the end of September,” said Fabrice Leggeri, Frontex executive director, in an interview, Agence France Presse reported.

Frontex is the organization charged with monitoring the European Union’s external borders. The influx of refugees into Europe has not slowed despite increased international attention. More than a half-million people have crossed the Mediterranean Sea to Europe so far this year, which is double the number from 2014, the Associated Press reported Sunday. Experts worry the crisis could indeed get worse.

“One thing is clear, the movement is not going to die down,” said Babar Baloch, the U.N. refugee agency’s representative in the Balkans, the Associated Press reported. “What we are seeing right now … it’s just the tip of the iceberg.”

The European Union approved a plan last week to tighten border controls and send 1 billion euros ($1.12 billion) in funding to help Turkey, Lebanon and Jordan care for refugees. Women have accounted for 18 percent of 2015’s refugee arrivals, 13 percent have been children and 69 percent men.

German Chancellor Angela Merkel said Saturday Europe needs to protect its borders amid the largest influx of refugees since World War II. “And for Europe, this means we of course need to, above all, protect our external borders across Europe — and protect them together — so that immigration to Europe is orderly,” Merkel said, according to Reuters.

More than 200,000 people have entered Germany in September alone, with the government suggesting 800,000 refugees could enter throughout the entirety of 2015.