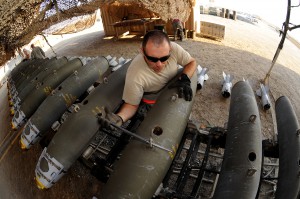 Galvanized by the Nov. 13 terror attacks in Paris that killed 130 civilians, U.K. Prime Minister David Cameron and German Chancellor Angela Merkel pledged to stand by France in its stepped-up efforts to defeat the extremist group in Syria and Iraq. Cameron exhorted lawmakers to back wider British air strikes in the region, while Merkel sought support for deploying reconnaissance aircraft.

“We shouldn’t be content with outsourcing our security to our allies,” Cameron told a packed chamber of the House of Commons in London on Thursday. “If we believe that action can help protect us, then we should be with our allies. If we won’t act now, when our friend and ally France has been struck in this way, then our allies in the world can be forgiven for asking: ‘If not now, when?’.”

The shift toward a united European military response to the Islamic State’s attacks in Paris marked a new projection of power for the region, with the French aircraft carrier Charles de Gaulle stationed in the eastern Mediterranean and British Tornado fighter-bombers poised to join the attack. Hollande’s diplomatic efforts this week took him to Washington for talks with U.S. President Barack Obama in addition to meetings with Cameron and Merkel.

Merkel is poised to ask the Bundestag to back the deployment of Tornado reconnaissance aircraft to Syria, according a senior official from her caucus. The planes would be used for surveillance only and not in a combat role, the person said, asking not to be identified because the plan has yet to be put to the lower house. Merkel, Vice Chancellor Sigmar Gabriel, Foreign Minister Frank-Walter Steinmeier and Defense Minister Ursula von der Leyen are meeting Thursday to discuss Hollande’s request for greater German engagement in the fight against terror, a government official said.

More complicated for Hollande will be finding common cause with Putin during their meeting Thursday evening at the Kremlin. Initial signals of a joint line of attack between the U.S.-European alliance and Russia were upended this week by the shooting down of a Russian fighter jet by NATO-member Turkey.

Obama and European leaders have called for restraint to avoid any escalation between Russia and Turkey, struggling to salvage the momentum gained at the Group of 20 summit in Antalya 10 days ago. The U.S. has pressed Russia to focus on air strikes against the Islamic State rather than the moderate opposition to Syrian President Bashar al-Assad.

The impossibility of forging a joint command and sharing intelligence with Russia would preclude a coalition, according to a French official with knowledge of Hollande’s objectives. Instead, the French leader hopes to get Putin to agree at least to some common targets, such as Islamic State’s oil business and command centers.