You are here: Home / Europe / Europe marks day of remembrance of victims of Islamic terrorism 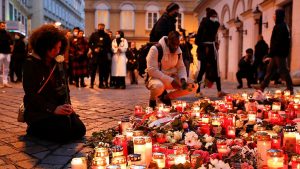 Europe on Thursday commemorated those who lost their life to terrorism with a ceremony in Madrid, the capital of Spain, like reported by cgtn.com.

In an event organized by the European Commission, the 17th European Day of Remembrance of the Victims of Terrorism brought together victims of terrorism, victims’ associations and first responders to share their stories and experiences.

This year, the theme of the event was “Always United.” “To all who seek to hurt and divide us, we will continue to respond with unity,” the commission said in a statement for the occasion.

“We are committed to building inclusive and cohesive societies in which everyone has a stake and everyone can feel safe,” said the statement.

It explained how it was building the bloc’s resilience to prevent these attacks, and fighting the terrorist threat resulting from different forms of extremism.

“We are taking steps to block online terrorist propaganda, to stop terrorists from spreading hatred online. But no one can fight crime without taking care of its victims,” it said as it remembered the victims and survivors of these acts.

Established to commemorate the Madrid bombings of March 11, 2004, the annual Remembrance Day is devoted to remembering all those who lost their lives or loved ones to terror, irrespective of whether those terrorist attacks took place inside the EU or beyond its borders.

On March 11, 2004, a series of bombings took place in Madrid, claiming lives of some 200 people and injuring a thousand others.