You are here: Home / Europe / Europe fails to relocate 40,000 migrants 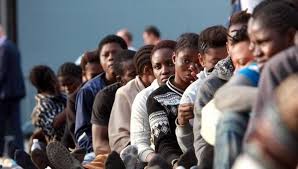 The EU failed yesterday (20 July) to agree on how to distribute 40,000 asylum seekers in Greece and Italy among its members over the next two years, postponing the decision until the end of the year.

Following the deaths of 700 people on a fishing boat heading for Italy from Libya in April, at a summit in June, EU leaders called for agreement on the relocation by the end of July – a potentially divisive move in some countries where far-right parties and populist anti-EU movements are gaining ground.

EU home affairs ministers agreed in Brussels on Monday to respect the summit’s indications by committing to the relocation of 40,000 migrants forecast to arrive in Greece and Italy over the next two years, but the actual numbers for each member state will be defined in another meeting by December.

Some 150,000 migrants fleeing wars and poverty have reached Europe by sea so far in 2015, the International Organization for Migration said, most of them arriving in Italy and Greece – two countries already hit by a long economic slump. Hundreds have drowned on the journey.

A deal is critical, as the EU also needs to turn its attention to the growing numbers of asylum seekers crossing the Balkan peninsula to reach Central Europe.

Hungary has received the EU’s highest number of asylum applications in the first quarter of 2015, according to European Union data, and has started building a security fence along its border with Serbia to keep illegal migrants out.

“We are almost there,” the EU’s Migration, Home Affairs and Citizenship Commissioner Dimitris Avramopoulos told a news conference at the end of the meeting. “I am disappointed, but it was an important step forward,” he said.

The first asylum seekers may be relocated before a full deal is reached, “starting from October”, Luxembourg’s Minister of Foreign and European Affairs, Jean Asselborn, said.

EU countries have so far only agreed to take about 32,000 of the asylum seekers from Italy and Greece.

Spain and Poland were among the staunchest opponents to the plan. But other countries also committed to taking fewer migrants than the EU had requested, or rejected them fully.

“We are very critical of the relocation plan because it will create a pull factor” attracting more migrants to Europe instead of preventing their departure, said Spain’s Minister of the Interior, Jorge Fernandez Diaz. Spain committed to taking 1,300 refugees, although the EU requested a commitment of about 4,300.

Austria refused to commit to any figure. “Austria has become the first target country and deals with 10 times more asylum seekers’ application than Greece and Italy put together and this cannot be right,” Austrian Interior Minister Johanna Mikl-Leitner told reporters.

Hungary has been exempted from taking in any asylum seekers from Italy or Greece. Britain and Denmark have no obligation to participate. Ireland was exempt too, but decided voluntarily to commit to take in 600 asylum seekers.

Under the plan, the Commission also wants EU governments to take in 20,000 refugees from their countries of origin, such as Syria or Afghanistan, or in transit, such as those who have flooded into Syria’s neighbour Lebanon. That part of the plan has been agreed by ministers.

In exchange for taking in more refugees, the Commission blueprint involves stricter identification of migrants arriving in Italy and Greece, and streamlined procedures to send home those who cannot claim international protection.