You are here: Home / Europe / Europe facing most serious islamic terror threat in more than a decade, Europol warns 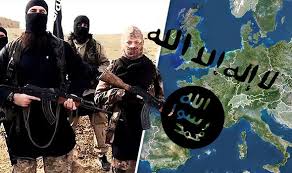 Rob Wainwright, director of Europol, said more integration across the European Union, Norway and Switzerland was needed to share information on jihadis waging terror across the continent.

Speaking to nearly 100 high ranking security officials from the 28 EU states, Norway and Switzerland at the Ministry of Foreign Affairs in Berlin, Mr Wainwright said: “Europe is facing the most serious terrorist threat for over ten years.

“The increasing transnational nature of terrorist groups and their activities demand ever closer collaboration between relevant law enforcement authorities across Europe.

“The European Counter Terrorism Centre (ECTC) has been established at Europol for this purpose.

“I am pleased by the confidence expressed in the work of this centre by the police chiefs meeting in Berlin and by their clear commitment to enhance collaboration efforts even further.”

Mr Wainwright, the last Briton destined to hold the post, also stressed the importance of the UK staying in or committed to Europol after Brexit.

Speaking on Thursday, he told Sky News: “I have seen how threats of terrorism and organised crime have become much more global and how the need therefore for greater international police co-operation is absolutely essential to keeping us safe.

“Mechanisms such as Europol provide an important part of the way in which the law enforcement community in Britain and other countries around Europe can discharge those responsibilities.

“They work together in international networks and take advantage of modern communication technology.

We can only be successful in the fight against terrorism if all European security authorities work closely together and are coordinated by a central body.

“The most recent attacks in Europe have shown that, in particular, the exchange of information needs to be further enhanced and European information systems must be better coordinated.

“The establishment of an operational steering board at Europol is another important keystone for a strong European security network.”

The group resolved to establish an ‘operational steering board’ and leading member states and Europe to try and combat terrorism.