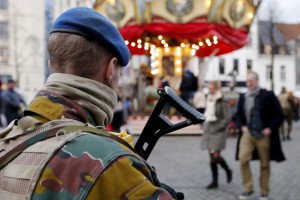 Terrorism experts in Europe have warned that the region could face a “new normal” of terror threats and disruption to daily life as countries come to terms with the reach and capabilities of the Islamic State group terrorists following the November attacks in Paris.

More recently, on New Year’s Eve, two metro stations in the German city of Munich were evacuated following a terror threat while New Year’s celebrations were scaled down in other cities due to security concerns.

“It is clear from what we saw in Paris that they are capable of controlling the process – able to train, plan and execute these attacks – and that is something that the security services across Europe will be taking very seriously indeed.” Margaret Gilmore, senior associate fellow at the Royal United Services Institute, told the Guardian.

Gilmore noted that while there was nothing new in terrorist organizations attempting to carry out attacks in crowded places, security agencies are now aware that ISIS has gained traction and supporters beyond its traditional arena of the Middle East.

According to experts, the knowledge that ISIS cells could carry out Paris-style attacks would mean more security, and potentially more cancellations of high-profile events in the coming months.

“In the months ahead we are going to be facing a new normal,”  Rik Coolsaet, a terrorism expert at Ghent University in Belgium told the Guardian, “One day the hype surrounding ISIS will have vanished, but until that happens I fear there will be more threats, more disruption, more houses raided and more arrests as countries come to terms with the scale of this group and its intentions … It is something we will have to get used to.”

According to Coolsaet, ISIS propaganda was finding traction with all kinds of individuals, “from thrill-seekers to the mentally unstable,” which would further complicate the security services work.

Since the Paris attacks on Nov. 13, Police raids have shaken immigrant-heavy areas in Belgium and France, European cities have undergone emergency shutdowns and Paris-bound flights have been cancelled on more than one occasion. Less than a week after the Paris attack, a friendly soccer game between Germany and the Netherlands was canceled in Hanover after police received information that someone was planning to detonate a bomb in the stadium. No bomb was found, and an unclaimed package on a train going to the stadium turned out to be a dummy.