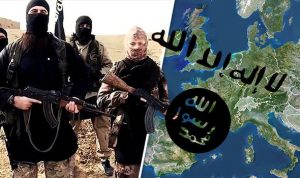 Will the collapse of Islamic State in Syria and Iraq, and the ending of the terror group’s caliphate make much difference when it comes to the recruitment and radicalization of Europeans or reducing “lone wolf” attacks?

With U.S.-backed Kurdish-led forces close to finishing off IS in Raqqa, the terror group’s de facto capital in Syria, the question is becoming more pertinent. But French and Belgian officials don’t believe the killings will stop in Europe, at least not in the foreseeable future, like reported by voanews.com.

Analysts say the caliphate was useful in the marketing of IS and attracting foreign recruits, as well as allowing the group to differentiate itself from rival al-Qaida, which opposed the setting up of an Islamic state and ridiculed Abu Bakr al-Baghdadi’s self-appointment as caliph. Now one of the only ways for the terror group to remain relevant and to try to continue to outshine its jihadist competitor al-Qaida is to strike the West as frequently as it can, experts say.

Last month, al-Baghdadi broke an 11-month public silence by releasing an audio-tape mocking the United States, calling on jihadists to rally against the Syrian regime and insisting IS “remains” despite its rapid loss of territory. He echoed the message of the late IS propaganda chief Abu Mohammad al-Adnani, who declared that holding territory mattered less than the will to fight.

But much of al-Baghdadi’s focus was on celebrating attacks on the West, saying, “America, Europe and Russia are living in a state of terror.”

Speaking in August, after IS had been ousted from the Iraqi city of Mosul and as Kurdish-dominated forces started their assault on Raqqa, French President Emmanuel Macron said the fight against Islamic terrorism is France’s “top priority” and would remain so for some time.

French and Belgian officials say IS is highly innovative and despite efforts to reduce the group’s “virtual footprint” it is still able to disseminate propaganda, which it carefully calibrates to better mobilize followers, testing new ideas as it shapes narratives for whatever it considers tactically appropriate.

Researcher Charlie Winter says for IS the media war has always been as important as physical victories in Syria and Iraq.

In a paper for the International Center for the Study of Radicalization and Political Violence, a research center based in the Department of War Studies at King’s College London, Winter noted for IS “propaganda production and dissemination is at times considered to be even more important than military jihad.”

He added, “The Islamic State sustainably incites activism, whether from operatives or online volunteers, by venerating information warfare in a manner unparalleled by any other Salafi-Jihadist actor.”

Even with the loss of most of its territory IS can still wage information warfare, recruit and incite. Winter says, “The international community must be equally as creative and strategic-minded in its approach towards counter-communications.

The overall problem of radicalization remains the same today as it did before IS’s battlefield defeats, officials and analysts warn. Former French prime minister Manuel Valls has dubbed radicalization “a deadly social model.”

France isn’t alone in struggling to understand radicalization and to develop effective ways to counter it. Sixteen years after the 9/11 attacks and Western governments are still unclear about the mechanics of radicalization and why some embrace the radical jihadist vision and do so to the point of staging or participating in murderous attacks.

Sociologist Farhad Khosrokhavar, a professor at the École des Hautes Études en Sciences Sociales (School for Advanced Studies of Social Sciences) in Paris, worries radicalization is still seen by governments too much as purely a national security challenge. Governments, he has argued, fail to study enough the long-term effects of stigmatization, social exclusion and delinquency. The role of the internet and closed social-media groups in forming jihadist allegiances and creating the cult of what he calls the “negative hero” is only just beginning to be understood.

Psychological factors are also crucial. At a conference in London last year, Khosrokhavar highlighted how a substantial number of jihadist attackers in the West had been diagnosed with depression or other mental illnesses.

But efforts to deepen understanding of radicalization often meet resistance from political leaders, especially when they are facing public clamor to stop terror attacks. Valls is famous for once saying he was tired of “social, sociological, and cultural excuses” to explain jihad. “To explain is to excuse,” he said.

France, which since 2015 has been battered by a series of attacks with the loss of over 240 lives, has more than 350 Islamic extremists locked up in French prisons, nearly 6,000 militants are under police surveillance and a further 17,000 classified as potential threats. Belgium’s numbers aren’t as high, but the relatively small country occupies an outsized role when it comes to European jihadism. Belgium has contributed per capita more fighters to IS and other jihadist groups in the Levant than any other European country.

Both countries have grappled with shaping de-radicalization programs that work. It was only two years ago that France launched efforts to try to stop the radicalization of disaffected youth, much later than several other European nations. But its efforts have been troubled and a plan to open 13 de-radicalization centers, one in each of France’s 13 regions, has fallen by the wayside after the first experimental center was closed down earlier this year amid arguments over methods.