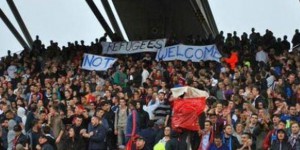 Europe is “close to limit” on accepting refugees, EU President Donald Tusk said Sunday, as he urged the international community to do more to step up resettlement of those seeking refuge.

A growing number of refugees have fled to Europe to escape instability in Syria, Iraq, Eritrea and Somalia, among other nations.
“The practical capabilities of Europe to host new waves of refugees, not to mention irregular economic migrants, are close to the limits,” Tusk said Sunday before the start of the two-day G20 summit in China.
G20 leaders are meeting in Hangzhou, about one hour outside of Shanghai, through Monday to tackle issues including trade, terrorism and climate change.
Tusk urged fellow G20 member countries to do more to support the world refugee population.
“In light of an unprecedented number of 65 million displaced people all over the world, the G20 community needs to scale up its share of responsibility,” Tusk said.
“Only global efforts supporting refugees and their host communities will be able to bear fruit.”
“That is why we want to encourage our partners to increase humanitarian and development aid, as well as refugee resettlement. We need to address the root causes that force millions of people to leave their homes and seek shelter elsewhere.”
Last week, the US met its goal of resettling 10,000 Syrian refugees.
Initially, there was concern over whether it would meet this goal since the US only admitted about 1,900 refugees in the first four years of the Syrian civil war.
However, it is a relatively small milestone. The number of US resettlements pales in comparison to Turkey, a much smaller country, which hosts over 2.7 million displaced Syrians, according to UN figures.
David Miliband, president and CEO of the International Rescue Committee, urged the US to up its acceptance rate to 140,000 refugees in 2017.
G20 was launched in 1999, and consists of Argentina, Australia, Brazil, Canada, China, France, Germany, India, Indonesia, Italy, Japan, Mexico, Republic of Korea, Russia, Saudi Arabia, South Africa, Turkey, the United Kingdom, the United States and the European Union.
cnn.com