You are here: Home / Europe / Europe braced for terror attack by female ISIS assassin after arrests in France 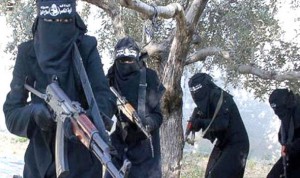 Fears of a new wave of female recruits have been growing in France since authorities made several arrests of women who had pledged allegiant to the twisted terror network.

Earlier this month French police arrested two young women from the city of Nice for suspected ties to the ISIS militant Rachid Kassim, the Paris prosecutors’ office said on Sunday.

The teenagers, aged 17 and 19, were being groomed to carry out an attack on “specific targets” in France in retaliation for the recent death of the Islamic State’s spokesman Abu Muhammad al-Adnani, a source close to the investigation said.

The pair used the Telegram encrypted messaging system to communicate with Kassim, who is suspected of having participated in several attacks or attempted attacks in France.

Security experts have warned that authorities often turn a blind eye to women jihadis because they are not deemed to be a high risk.

She added: “While women who head to ISIS controlled territories may be limited to support roles, women who are attracted to groups like ISIS are often interested in, and capable of, full operational support.

“We should expect groups like ISIS to either directly or indirectly incite, inspire or direct women to participate in terrorist attacks against targets throughout the world.”

The French teenagers admitted considering the attack, before abandoning the idea, it was reported.

At least four other teenagers, all suspected of having plotted to kill in the name of the Islamic State, were arrested in about 10 days in early September by the General Directorate for Internal Security, a French intelligence agency, which spotted the suspects on social networks.

All were in contact via Telegram with Kassim, who is currently located in the Syrian-Iraqi region, according to police sources.

US researchers recently found that female terrorists do a better job then men at maintaining networks and communicating with fellow operatives.

And figures released by the UK government show that female terror arrests are on the rise in the UK.

A record number of suspected female terrorists were detained by British police last year, amounting to 14 per cent of all arrests on terrorism charges.

Samantha Lewthwaite, known as ‘the White Widow’, was one of the most high profile female jihadis to flee the UK.

Jihadi bride Sally Jones is another of the estimated 56 British women and girls who have travelled to Syria to join the blood thirsty terror group.

Among those were three schoolgirls from east London who travelled to Syria last year.

Shamima Begum, Kadiza Sultana and Amira Abase fled the UK and married ISIS fighters in the Syrian city of Raqqa.