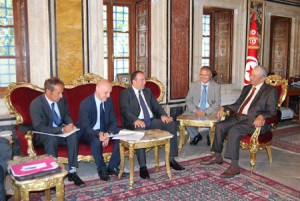 Europe has asked Tunisia to sign an additional protocol to the Convention on the Prevention of Terrorism that criminalises foreign terrorist fighters.

Europe’s call was conveyed by Chairman of the Committee of Ministers at the Council of Europe Igor Crnadak at a meeting Monday in Bardo with Speaker of the House of People’s Representatives (HPR) Mohamed Ennaceur.

“The signing of the additional protocol to criminalise foreign terrorist fighters will help expand co-operation in the fight against the danger of terrorism,” noted Crnadak who is visiting Tunisia from September 20 to 22.

“Tunisia’s security and stability directly impacts the situation in European countries since terrorism targets values and foundations shared by both sides,” Mr. Ennaceur was quoted as saying in a HPR press release.

Tunisia recently adopted a new law on the fight against terrorism and money laundering.

The Security Council had discussed last May a resolution on the growing threat of foreign terrorist fighters, of whom 25 thousand, from one hundred countries, have joined the main hotbeds of tension in Afghanistan, Iraq, Libya and Syria.