You are here: Home / Mediterranean / Europe and Nato’s Libya nightmare outcome would leave Russian and Turkish military bases staring across the Med 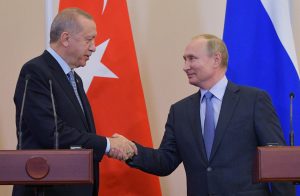 What’s the worst scenario that could emerge from conflict-torn Libya for Europe and Nato? Perhaps a divided country with permanent Russian and Turkish military bases staring across the Mediterranean from its east and west, respectively, like reported by intellinews.com?

Such an outcome may still sound a little far-fetched, but it can’t be ruled out. June 14 brought a report from Reuters that related how a Turkish source had disclosed that Turkey and Libya’s internationally recognised Tripoli-based Government of National Accord (GNA) were discussing possible Turkish use of two military bases in the North African country with a view to a lasting Turkish presence in the south Mediterranean. While last week, after Russia apparently flew 14 MIG-29 and Su-24 fighter jets to desert sites controlled by the GNA’s adversary, the Libyan National Army (LNA) under Marshal Khalifa Haftar, US Africa Command (AFRICOM) noted that Russian President Vladimir Putin now had access to two air bases in Libya and there were fears that he might want to make that, and perhaps more, a permanent arrangement. The commander of AFRICOM, Gen. Stephen Townsend, said of the Russian move: “Just like I saw them doing in Syria, they are expanding their military footprint in Africa using government-supported mercenary groups.”

Reportedly, no final decisions have been made over possible Turkish military use of the Misrata naval base and the al-Watiya air base, recently recaptured by the Turkish-backed GNA.

A more permanent air and naval presence in Libya could reinforce Turkey’s growing influence in the region. That might help boost its claims to offshore oil and gas resources and pave the way for billions of dollars in contracting work, such as energy and construction deals, once the fighting ends. If there is one thing Turkey’s Erdogan administration needs right now, it is more revenues to help stave off a calamitous economic crisis.

“Turkey using al-Watiya … is on the agenda,” added the quoted source. “It could also be possible for the Misrata naval base to be used by Turkey.”

Ankara threw its support behind the government in Tripoli last year after the GNA signed a maritime demarcation accord that it says provides Turkish drilling rights near Crete. But it is opposed by Greece, Cyprus, Israel and the European Union, with Athens complaining that the accord actually ignores the physical presence of Crete.

As things stand, it appears Russia is holding back from fully engaging with Turkey over a possible Libya ceasefire deal because of a GNA plan to attack and seize Sirte, about halfway between GNA-held Tripoli and LNA-held Benghazi, and the closest city to Libya’s main energy export terminals.

“Russia wants Turkey and the GNA to halt military operations, particularly not attacking Sirte, Jufra and the oil crescent—and Ankara has rebuffed this demand,” Galip Dalay, a fellow at Robert Bosch Academy, told Reuters. “If Turkish-Russian talks don’t bear fruit, we might then see escalation both in Libya and in Syria’s Idlib region [where Ankara and Moscow also back opposing sides],” he added.

France, Turkey in war of words

The past couple of days, meanwhile, have seen Turkey and France enter into a war of words over the situation in Syria.

In an interview with La Croix newspaper on June 16, French Foreign Minister Jean-Yves Le Drian reiterated that Paris was not taking sides in Libya, but said that Turkey endangered European security by sending Syrian fighters to the country. “It’s a danger to ourselves, an unacceptable strategic risk, because it’s 200 kilometres (124 miles) from the Italian coast,” he said.

France has denied claims that it supports Haftar, though it previously gave him assistance in fighting Islamist militants. It has also stopped short of criticising countries that openly support him, such as Egypt and the United Arab Emirates, while it has repeatedly criticised Turkey’s stance.

Insisting Paris has swung behind Haftar, Turkey on June 16 angrily accused France of exacerbating the crisis in Libya and violating UN and Nato decisions by supporting his forces against the internationally recognised GNA.

France has called for talks among Nato allies on what it said was Turkey’s increasingly “aggressive” role in Libya and breaching of a UN arms embargo in arming the GNA, prompting Turkey’s foreign ministry to respond angrily. “The support France has provided to the putschist and pirate Haftar… has exacerbated the crisis in Libya,” it said in a statement.

“What should actually be a cause for concern are France’s dark ties. It is unacceptable for a Nato ally to behave this way,” it added.

Ankara has sent military advisers and trainers, along with allied Syrian militia fighters, to Libya to support the GNA. Russia appears to have sent Syrian adversaries of the militia fighters to fight for the LNA in the conflict.