You are here: Home / Europe / EU ready to destroy smuggler boats at sea 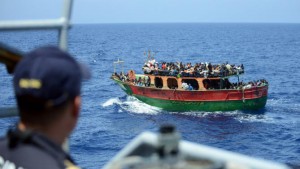 The EU wants to step up its boat-sinking operation against smugglers in the Mediterranean sea.

Federica Mogherini, the EU’s foreign policy chief, said on Thursday (3 September) that the EU’s naval operation – EUnavfor Med – is now ready to move from a surveillance-only phase to one that seizes and destroys boats in international waters.

“The intelligence that was gathered throughout phase one highlighted that, on at least 16 occasions in these last five weeks, we could have gone after smugglers and traffickers already”, she said.

Mogherini laid out the latest plans at a meeting of EU defence ministers, but noted they still need to be formally adopted.

Foreign ministers meeting in Luxembourg on Friday and Saturday will also discuss the phase two plan.

But she said the transition to phase two would require “more vessels, more assets”.

Launched in June, the anti-smuggling flotilla already includes the Italian flagship “Cavour”, the British warship “Enterprise”, two German warships, in addition to air assets from France, Luxembourg, Italy, and the UK, including two submarines, deployed for their advanced surveillance and detection capabilities.

The third phase will see the EU operation destroy boats “preferably before use” and apprehend traffickers and smugglers.

Moving the operation from the high seas to inside territorial waters is a contentious issue for Libyan and Russian authorities.

The EU needs formal approval from Benghazi or the backing of a UN Security Council resolution. It has received neither.

Libya’s internationally-recognised government in Tobruk does not control the coastal area of the country where many of the smugglers disembark.

With Tobruk’s mandate set to end in October, Mogherini is hoping the UN can finalise a deal to broker a national unity government with its rival government, a loose alliance of militias, based in Libya’s capital Tripoli.

Russia has now indicated it would back a UN resolution that excludes territorial waters.

Vitaly Churkin, Russia’s ambassador to the UN, said the resolution could be adopted within the month.