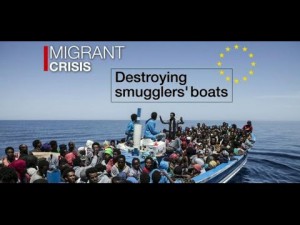 EU foreign ministers agreed earlier on Monday to launch a naval mission to combat gangs of human traffickers who transport scores of migrants from Libya to European coasts.

According to the source, who wished to remain anonymous, about a thousand people will be engaged in the operation, which is set to reach full capacity within a month.

The naval mission aims to collect information on smugglers while remaining in international waters, its vessels will not enter Libya’s territorial waters, the source said.

The source added that the European Union would cooperate with NATO, as well as with the UN Refugee Agency, the African Union, the Arab League and other international organizations.The EU mission, called the EUNAVFOR Med operation, foresees the seizure of ships trafficking undocumented migrants from North Africa across the Mediterranean Sea to Europe as well as the prosecution of the ships’ captains.

The initiative was unveiled by EU foreign policy chief Federica Mogherini in May. However, the mission was launched without UN Security Council approval.