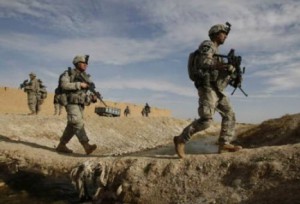 European plans for a military campaign to smash the migrant smuggling networks operating out of Libya include options for ground forces on Libyan territory.

The 19-page strategy paper for the mission, obtained by the Guardian, focuses on an air and naval campaign in the Mediterranean and in Libyan territorial waters, subject to United Nations blessing. But it adds that ground operations in Libya may also be needed to destroy the smugglers’ vessels and assets, such as fuel dumps.

“A presence ashore might be envisaged if agreement was reached with relevant authorities,” says the paper which is expected to be endorsed by European Union foreign ministers on Monday before the mission is ordered by heads of government at an EU summit in June.

“The operation would require a broad range of air, maritime and land capabilities. These could include: intelligence, surveillance and reconnaissance; boarding teams; patrol units (air and maritime); amphibious assets; destruction air, land and sea, including special forces units.”

The document speaks of possible operations to destroy smugglers’ assets “ashore”. This could include “action along the coast, in harbour or at anchor of smugglers assets and vessels before their use”.

Senior diplomats and officials in Brussels, speaking privately about the military planning, have consistently stressed that there would be no prospect of “boots on the ground” in Libya. But it is clear from the detailed planning document that they might be needed and are not being ruled out.

EU leaders ordered Federica Mogherini, the union’s foreign and security policy coordinator, to come up with proposals for military action to attack the networks three weeks ago. The resolution is being drafted by the British in New York. Mogherini went to China last week and believes Beijing will not veto the plans in the security council. Russia is the biggest problem. It says it is willing to “cooperate” but may object to some of the more robust language.

The campaign’s aim is defined as “to disrupt the business model of the smugglers, achieved by undertaking systematic efforts to identify, seize/capture, and destroy vessels and assets before they are used by smugglers … The operation will need to be phased in and will be heavily dependent on intelligence.

“The Mission is therefore defined to be ‘to provide surveillance, intelligence gathering and sharing, and assessment of smuggling activity towards and through the Southern Central Mediterranean Area, and to stop, board, search and dispose of, possibly through their destruction, trafficking vessels and assets before use and thereby contribute to EU efforts to disrupt the business model of trafficking networks.”

Subject to a UN go-ahead, the military operations would need to focus on actions “inside Libya’s internal and territorial waters and the coast”, the document says, while adding that seizing and destroying vessels on the high seas or in international waters in the Mediterranean would also be mandated.

The planning document admits that the campaign could result in innocent people being killed: “Boarding operations against smugglers in the presence of migrants has a high risk of collateral damage including the loss of life.”

The military campaign planning has been ordered because of the influx of migrants from sub-Saharan Africa and the Middle East across the Mediterranean from Libya, with the death toll this year alone already nudging an estimated 2,000.

The paper cites information from the Italian police authorities saying that 200,000 migrants are preparing to board shoddy vessels to risk the crossing from Libya to Italy’s southern shores.

Up to 10 EU countries have volunteered to take part in the campaign, said senior officials, including Italy, which would command it, Britain, France, and Spain.